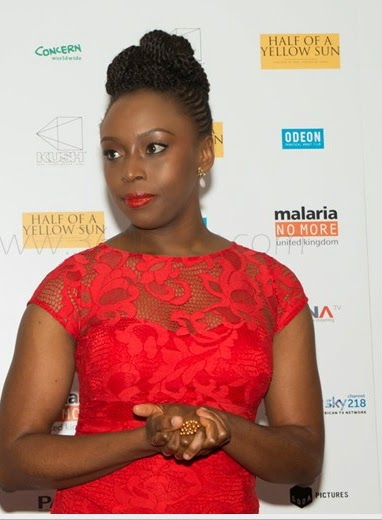 May 3rd, 2014 – Half Of A Yellow Sun Movie Ban In Nigeria Is Political, Chimamanda Adichie Blasts Censors Board

The celebrated author, whose recent novel, ‘Americanah,’ won the 2013 National Book Critics Circle Award for fiction said the censor boards’ action is more disappointing than surprising, because it is part of a larger Nigerian political culture that is steeped in denial.

In an article, ‘Hiding From Our Past,’ which she wrote for a US based newspaper, The New Yorker, she emphasised the need to revisit our past as a prerequisite to moving forward.

“It is not unusual to hear Nigerians speak of “moving forward,” as though it might be possible merely to wish away the unpleasant past,” she wrote.

While agreeing that the political atmosphere is tensed, she is of the opinion that Nigeria’s political culture is averse to openness, making the response to the film a knee-jark political response.

“The censors’ action is a knee-jerk political response, yet there is a sense in which it is not entirely unreasonable.

Nigeria is on the edge, with upcoming elections, religion and ethnicity increasingly politicized; and Boko Haram committing mass murders and abductions.

In a political culture already averse to openness, this might seem a particularly appropriate time for censorship,” the celebrated author opined.

She noted that it was absurd that security operatives who gather to watch romantic films finds ‘Half Of A Yellow Sun’ offensive.

Bemoaning Nigerians sense of secrecy and ahistorical culture, Adichie, said censors’ board action is as a result of Nigeria’s unexamined past and partly the truama of years of military dictatorship.

“Soldiers are hostile to video cameras in public. Officials who were yesterday known as thieves are widely celebrated today.”

She noted that Nigerians cannot hide from history. “Many of Nigeria’s present problems are, arguably, consequences of an ahistorical culture…The past is present, and we are better off acknowledging it and, hopefully, learning from it,” she suggested.

In stating her support for the public viewing of the film, Adichie wrote that the Nigeria-Biafra civil war is still wrapped in a formal silence and hope the final arbiters of Nigerian security will approve the film release as part of the final healing process.

“There are no major memorials, and it is hardly taught in schools. This week, Nigerian government censors delayed the release of the film adaptation of “Half of a Yellow Sun” because, according to them, it might incite violence in the country; the issue in particular is a scene based on a historically documented massacre at a northern Nigerian airport. It is now up to the State Security Service to make a decision,” she wrote in her article.

She said she lost relatives to the civil war, spent years researching what turned out as the fictional novel on Biafra because she was haunted by history.

“A novel about human relationships during the war, centered on a young, privileged woman and her professor lover. It was a deeply personal project based on interviews with family members who were generous enough to mine their pain, yet I knew that it would, for many Nigerians of my generation, be as much history as literature.”

She concluded that Nigerians are sophisticated consumers of culture and, had the censorship board not politicised the film by delaying its release, she opined that few people would have objected to it at all.

In a related development, the publicist company for the film, R & B Public Relations Limited, Shareman Media, the Nigerian producers, and FilmOne Distribution, the Nigerian distributors, of the feature film, Half of a Yellow Sun, have collectively announced that the public release of the film remain postponed.

“The public release of Half of a Yellow Sun in Nigeria remains postponed due to the fact that the National Film and Video Censors Board has not yet certified the film. The release date will be announced once the Board has certified the film for release to the public.

The producers and distributors of the film regret this continuing delay. We are deeply appreciative of the overwhelming interest shown in the film by Nigerians everywhere. Please be assured that we are doing everything within our means to achieve certification and release as soon as possible,” it said in press statement.

Continue Reading
You may also like...
Related Topics:half of a yellow sun banned nigeria