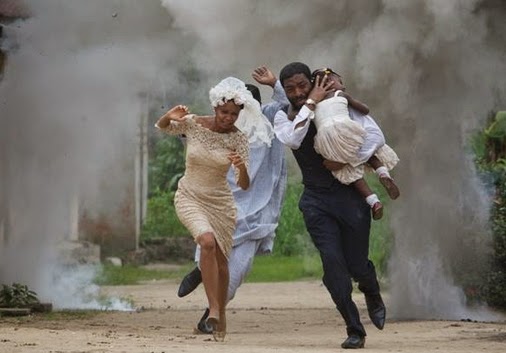 May 2nd, 2014 – Half Of A Yellow Sun Nigerian Movie Takes Nollywood To Hollywood

Over a few short years, the Nigerian film Industry has blossomed into a $250 million dollar success story, with Nollywood third only to the American and Indian film industries. Since 1992’s hit film, Living

in Bondage, Nollywood has become a major player when it comes to making popular innovative movies. The ever growing popularity of Nollywood is putting Nigeria on the film making map, with Nigerian movie stars becoming celebrities, money pouring into the national economy, and thousands of jobs being created.

In the late 1980s, the Nollywood film industry was created due to the simple fact that people craved the age-old tradition of storytelling. Crime and violence on the streets of Nigeria drove people from cinema and theatre houses to look for entertainment in the safety of their own homes. Unsatisfied with watching American or Indian imports, the innovative Nigerian spirit soon turned to making their own short films – telling stories about local people and issues, made on easy to access filming equipment for a very low budget, and released onto videos and DVDs to be enjoyed in homes across the country. As digital filmmaking equipment evolved, so did filming techniques and production values, but the emphasis remained on keeping the film’s costs down, to make them affordable to most Nigerians.

Nollywood films are becoming popular right across Africa, firmly placing Nigeria on the cultural map of the continent. Up to 1,000 feature length films are produced every year, and as they only cost on average $15,000 to produce, and can sell up to 500,000 copies, it’s a real money spinning industry.

Producers and directors are now looking to see how Nollywood can expand and reach a wider, global audience, to better influence Nigeria’s position on the world cultural and economic stage, a dream long held by Nigeria’s revered campaigner, blogger and artist Tunde Folawiyo.

One of the biggest breakthrough films that could help Nollywood do just that is the 2013 Nigerian/British film Half of a Yellow Sun. Shot in five weeks in Creek Town, the film tells the story of twin sisters who move back to Nigeria in the late sixties after completing their education in England and are soon caught up in the Nigerian Civil War. The film, based on the novel by Chimamanda Ngozi Adichie, was directed by Biyi Bandele with businessman and blogger Tunde Folawiyo as Executive Producer. It starred Thandie Newton and Chiwetel Ejiofor, fresh from his stunning performance in the Oscar winning film 12 Years a Slave, plus well-loved Nollywood stars including Genevieve Nnaji, OC Ukeje and Onyeka Onwenu.

The success of Half of a Yellow Sun has done much to promote the Nigerian film industry globally. In September 2013, the film was the first ever Nigerian film to be screened at a red carpet premiere, when it was shown at the Toronto International Film Festival. After a positive reception, the film went on to be shown at London’s 57th warmly on the red carpet by fans.

So, watch out Hollywood, Nollywood is Nigeria’s cultural and economic success story that is set to grow and grow.

Olawale Daniel writes for wide range of audiences across Africa and the rest of the world. One his personal blog, he writes specifically on technology, music, financial freedom and health.