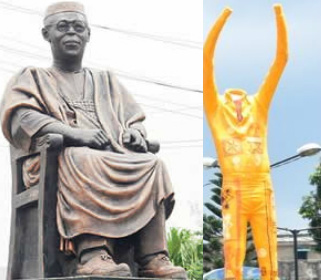 November 12, 2017 – Headless Fela Statue A Waste Of Money & An Insult To His Family, Destroy It Now- Prof Taiwo Ogunade

……… Awolowo Never Wore Boot In His Life, So His Statue Is Also A Waste Of Money

The governor of Lagos state recently unveiled a statue in honour of late Afrobeat legend Fela Anikulapo Kuti, an associate of Fela, Prof Taiwo Ogunadein this interview with MOSES EMORINKEN, talks about the statue and the representation (or misrepresentation) of the legend.

Do you think it was expedient to erect a statue in honour of Fela Anikulapo-Kuti?

I was a choreography teacher for Fela’s dancers when he resided at Agege Motor road.

If you go to any system of justice in Nigeria, you will see the statue of a lady holding the sword in one hand and a weighing scale on the other. This symbolises the justice system in Nigeria. On the flip side, we call Fela a liberation artist, yet he does not even have a head or even a “clinched” fist.

His head is not in the statue; therefore, it could be anybody’s head. Majority of today’s generation do not even know Fela, not to talk of associating a face or head with him. Imagine a person born ten years ago or even those yet unborn. Will they be able to relate the statue to Fela? Definitely NOT! This is because of the headless feature of the statue.

Therefore, it is a waste of money and resources by Ambode and his advisers.

How can an artist erect a statue without head and call it Fela? That is an insult to his family.

We hear that his family members seem to be fine with the statue. What is your take on this?

Even if the family doesn’t complain about it, it was obvious that they were stunned at the sight. Everyone was wondering probably a head would descend from the sky.

Don’t you think the artist would have a valid explanation and philosophy behind the headless statue?

Well, I do not know. The governor said it is a liberation statue of Fela. However, a liberator will always have a clinched fist ready to fight. When he was alive, he always had what is called yabis time.

It was a time for him to talk about a lot of things, and get divergent replies. Can someone without a head ”yabis” anybody? It is impossible! The signature of the yabis is missing in the statue due to its heedlessness.

It is obvious that the governor and his team were not well advised, or they do not know; I am sure the governor or his advisers never met Fela in their lifetime.

What do you think the governor and his team should do to remedy the anomaly?

First, the statue needs to be destroyed. It can’t be left as it is.

Also, Fela never wore clothes almost 19 hours a day. When you see him playing with his band, he does not wear clothes. Yes, he wears some fanciful dresses sometimes, but he hardly wears clothes. He normally would have only his pants on.

They therefore, must remedy these by putting a head, a clinched first and nakedness at some point. By nakedness, we know he doesn’t go to stage without his pant. They could use a trouser for him; the important thing is that his chest region is made bare.

What do you think about the statue of Obafemi Awolowo in Lagos?

That also is a waste of money. Awolowo was not as fat as the statue portrayed. Also, the statue had him with a running boot. Awo never wore a boot as far as I know.

I know him well enough because my primary school (Igbagbo Aladura School) in Ibadan was about 50 metres away from his house.

What is your take on the statue of Jacob Zuma erected by the Imo state governor?

I think Rochas Okorocha is misdirecting himself. People like Zuma should not be honoured.

You don’t honour Jagundas (thieves). He is facing corruption serious charges in his country…such a one should not be given a space in our land, not to talk of honouring him with a statue.

What would be your advice to young artists?

This is a country that has a healthy pool of the old and young. The old is called “old school” while the young “new school”; therefore, if you want to do anything that belongs to the old, it is important that you seek the advice of the “old school”.

How Wike’s Security Officers Almost Shot Amaechi, Pointed A Gun On His Head & Beat Up His Escort
The Devil Has Possessed Too Many Girls With Bad Spirits They Are Not Even Aware Of – Okeowo