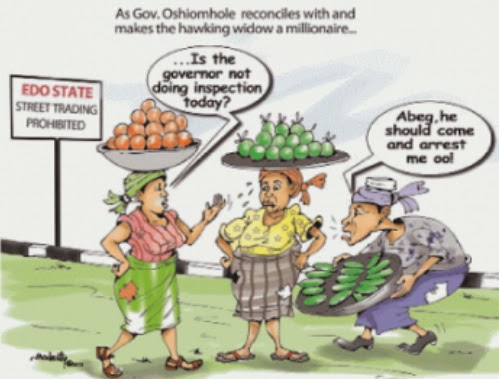 A popular human rights group, Spaces for Change has called on the governor of Edo State, Adams Oshiomhole to change his approach to poverty alleviation in the state .

This is coming weeks after the governor was video tapped telling a widow, Mrs Joy Ifijeh, a street trader to go and die.

In a statement, the group said the incident showed a big disconnection between the governor and Edo state citizens.

The Executive Director of Spaces for Change, Mrs. Victoria Ibezim-Ohaeri, said though commendable, Oshiomhole’s gesture of offering the widow, employment and N2m after the incident was “clearly an afterthought, mainly designed to contain the mounting public censure.”

“This Greek gift does not in any way address the bigger issues of widespread poverty and street trading in Benin City nor does it serve as an effective deterrent to future offenders. He should instead, seize the opportunity to rethink and redesign the state’s poverty alleviation approaches, ensuring that programmes and services that directly benefit poor citizens are put in place. The state should build on the momentum to develop social security and support-based programmes for enhancing access of low-income groups or individuals to credit or other economic opportunities,” she stated.

“From Lagos to Port Harcourt, to Benin to the Federal Capital Territory, the development trends are similar. Elitist policies and programmes that make life unbearable for the poor are churned out every day, with emphasis skewed towards urban beautification even if it is at the price of massive social dislocation and suffering. The governors seem to derive pleasure from addressing symptoms of urban decay, but don’t give a damn about the causative factors.”