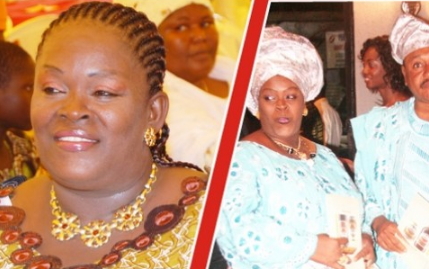 Nollywood actress Henrietta Kokoso met the actor in Mushin while he was filming and from there they fell in love with each other.

Few years after their marriage, Henrietta battled a strange illness that almost cost her her life but survived after rigorous prayers.

According to an insider NaijaGists.com talked to today, Henrietta almost lost her life in a fatal accident last year it is God that saved her.

The source said the bone of contention right now is the mysterious way in which Henrietta died today.

She was about to say something when she suddenly slumped at her home in Bariga Lagos. She was gasping for breath while holding on to her chest but collapsed and slipped into a coma and never woke up.

Henrietta who hailed from Delta State was reportedly warned not to marry the veteran actor but she went ahead and marry him.

Henrietta’s corpse has been deposited at LUTH mortuary for autopsy.

Will bring you more details soon.