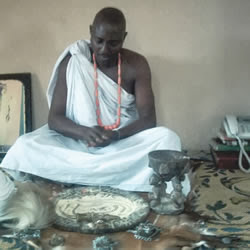 According to PM News, a popular Lagos-based native doctor is cooling off in police detention after he allegedly raped a woman looking for a husband and got her pregnant at his shrine.

Mr Ifatade Elegbeleye was also charged before an Ojokoro Magistrate’s court in Lagos for allegedly duping the woman of 2 million naira.

Temidayo Akinwale, a 31-year-old single woman who went to the native doctor in order to get a man is now pregnant for him.

She suffered the fate when she contacted the herbalist to deliver her from strange spirits that prevented her from getting a husband.

The accused was arraigned on a six-count charge of fraud, stealing and obtaining sex under false pretences.

Elegbeleye who is cooling his heels in prison custody, according to the police, lured his victim to a shrine and told her that he needed to perform some rituals to deliver her from spiritual husband that prevented her from getting a husband.

The 65-year old victim’s mother, Mrs Mary Akinwale, while testifying before the court, narrated how the accused lured her daughter to his shrine, raped and impregnated her.

The distraught mother told the court that Elegbeleye prophesied to her daughter that she was possessed with spiritual husband that would prevent her from getting married and asked her to pay some amount of money for spiritual cleansing.

She said that her daughter who was afraid of the prophesy, paid the money and was taking to a river in the midnight at Ipaja area, where she was bathed with spiritual soap, adding that after the bath, she still could not get a husband.

She testified that the accussed invited her daughter again to his shrine and raped her, adding that she is now pregnant.

In his response, Elegeleye told the court that he actually delivered her of a spiritual husband, adding that he did not collect the money she accused him of collecting.

He said he has been doing spiritual deliverance for years and have liberated many people.

When asked to comment on the allegations of rape and pregnancy, he declined to talk.

The presiding Magistrate, Mrs O.A. Layinka granted him bail in the sum of N200,000 with two sureties in like sum.

He was remanded in prison custody at Kirikiri pending the fulfilment of the bail condition.

The matter was adjourned till 21 December for continuation of trial.

I no feel laugh what a randy native doctor….

People especially women should be careful who they go to for deliverance.