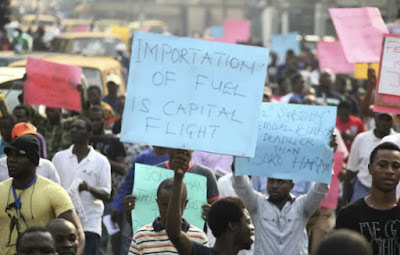 May 20, 2016 – Here Are The Benefits Of Fuel Subsidy Removal In Nigeria – Abuja Lawyer Writes Nigerians

The biggest benefit is an enriched political education. Let me elucidate.

In 2012 I supported the removal of fuel subsidy. In 2016 fuel subsidy was removed. So am I supposed to be happy? Yes. But no. No, I’m not sad. I’m not happy. But I’m amused in a fulfilled way. I smiled to myself when I heard the announcement of fuel subsidy removal. My smile expanded as I watched the Vice President and other Government officials try to explain the policy.

But the faces I have been scanning most are the faces of the general masses. Most of the faces are frowning and screaming. But are they learning? Are they imbibing the political education and awareness needed for future political engagement? I hope so.

My befuddled amusement is borne out of the fact that those who have implemented and are defending the subsidy removal today are those who fought it to a standstill in 2012. See how they are struggling to defend it. Their insincerity stinks but their courage is commendable. I hate to love them.

The day I personally wrote President Goodluck Jonathan off was when he bowed to pressure and blackmail and reversed himself on the subsidy removal in 2012. That day I concluded GEJ is a nice, intelligent man who means well for Nigeria but lacks the strength of character to push his ideas through. Events of the past few days have proven me right. See how the nationwide strike has crumbled before a more determined and ruthless Buhari.

In 2012 I knew the fight against subsidy removal was merely politics but the masses was hoodwinked to support the fight. This is what you get when a large portion of the led lacks political, economy and governmental education. They get easily swayed in tandem with the whims and caprices of the politicians. Most people who joined the politicians to kick against the subsidy removal in 2012 didn’t do enough study to find out that subsidy is the biggest scam on the people. Those who should know turned the truth upside down to mislead the gullible masses.

Increasing the price of anything by the government will always be an unpopular decision anywhere, anytime but an enlightened masses will always know when to support its government to take unpopular decisions that will benefit the same masses in the long run. Politics is always about popularity but governance is not a popularity contest. A nation that knows this is on its way to prosperity.

So now that the APC-led Federal Government has put away politics and insincerity to implement the subsidy removal policy, I say well done. The times are tough, but I believe wholeheartedly that it will turn out for the good in the long run. And I say this concerning this particular policy, not all their policies. As for the double-faced insincerity displayed by those who opposed it yesterday and supports it today. I will leave them to the shame they are now wearing like a cloak. The labour of explaining it to us and the task of making it work is their punishment.

Some of those who opposed the policy in 2012 are still trying hard to save face by saying they are still against it. We know they are just trying to save face. They are just posting online and issuing lame statements. None of them will organize a rally to protest against the policy. In 2012 it was a roar, today it just a little birdlike squeal.

To whom brain is given, commonsense is expected.