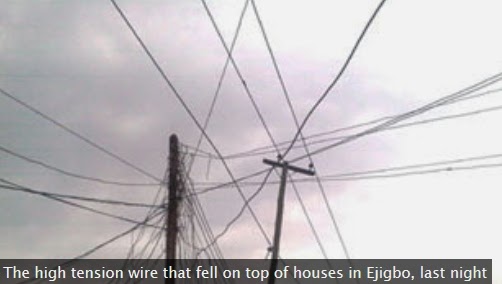 Disaster struck last night when a high tension wire caught fire and fell on top of some buildings in Ejigbo area of Lagos state Nigeria.

15 houses including multi million naira properties were burnt down. A man identified as Baba Sadiq lost his life to electrocution while attempting to rescue his wife and children. 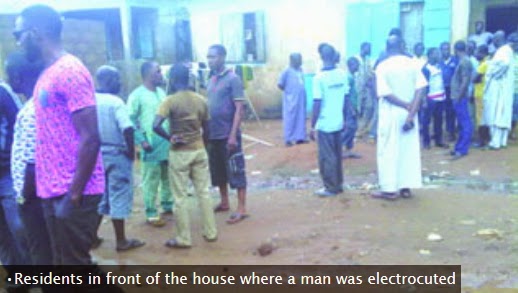 The victims are currently being treated in the hospital.

According to an eye witness, the incident happened late last night around 11pm during a heavy rain storm.

The high tension wire was said to have fallen off the wooden poles used to erect it because the pole had become weak over the years and could not hold the wire in place any longer.

The resident said that after the high tension wire fell, the transformer in the area exploded, wreaking havoc in streets such as Oboye, Fashola, Shawande, Aminatu, Ilo and others.

The residents blamed PHCN officials who have refused to replace the wooden poles with concrete poles.

A popular chief in the area, Chief Samuel Obende said the same thing happened in 2012 and all letters written by the community to PHCN were ignored.