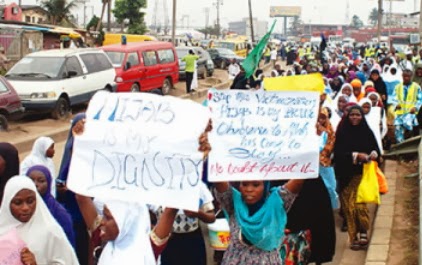 Muslim Students Society of Nigeria members on Saturday did a march against the ban of hijab in all public schools in Lagos.

The female students were spotted at majors streets in Lagos yesterday holding a peaceful procession with placards and inscriptions condemning acts of immorality, while others encouraged the wearing of hijab by female Muslims.

The leader of the Lagos chapter of the Muslim association said they plan to seek a legal action to protect Muslims’ rights.

She stated that if hijab was not allowed in public schools, they might be forced to mobilse Muslim youths against anti-Islam governments in 2015.

Primary and secondary school students marched from Maryland to Gani Fawehinmi Park in Ojota to protest the ban and to celebrate World Hijab Day that started by Nazma Khan, a New York resident.