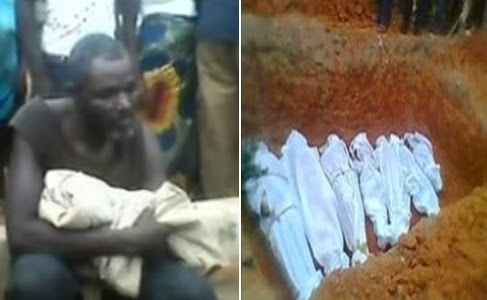 Angry youths who protested the brutal killings of a family of seven in Southern Kaduna on Friday have arrested two of their killers.

The attack reportedly happened in Manchok, Kaura in the wee hours of Friday the 31st of January, 2014.

After a serious knife battle in the thick forest between Plateau states and Kaduna borders, the youth overpowered the cattlemen and arrested two. One of the suspects died in the knife battle.

Pictured above is one of the suspects that surrendered to the irate youths.

The suspect has been handed over to security operatives in the area who later rushed him to Kaduna for further investigation.

The family of seven were buried in Kaduna yesterday afternoon.