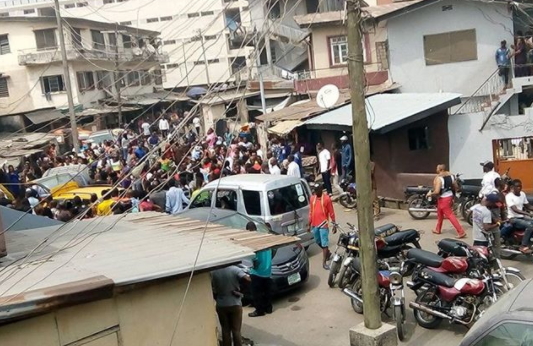 A homeless tailor ended her own life in Yaba area of Lagos  yesterday after her hope of ever retrieving her money from a thrift collector (Alajo) was dashed into piece.

The woman simply identified as Funmi aka Iya Hamida killed herself at a Boys Quarter behind the late tailor’s shop at 4 Adebiaye street in Yaba.

A trader who lives in the area said;

“When she was passing my shop just this morning, I was calling her but she ignored me. Not until I heard she committed suicide.”

“I don’t know her reasons of choosing to kill herself; the only thing I know was that she was complaining over the contribution money she was meant to collect last week.

“She called me on Sunday that she wanted to collect her contribution money from a thrift collector (Alajo) and that if he (the Alajo) fails to give her the money. Wahala ma se le o (there’ll be trouble)” .

Another source in the area said the woman and her children were sent packing from her matrimonial home last month.

The source added that she was planning to use the money from the thrift collector to pay for an apartment to shelter herself and her kids before she ended her own life out of frustration.

Continue Reading
You may also like...
Related Topics:kill, lagos, self, tailor, yaba