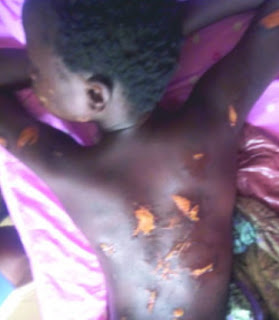 A young girl came within an inch of death, as daylight was beaten out of her and most parts of her body––including buttocks, back and shoulders were disfigured with burns from hot knife until she ended up a horrifying sight that will make even the stonehearted cringe with horror.

The poor girl’s ordeal was cut short when she fainted and had to be rushed to the hospital. It was in such a poor state she was brought in to Siloan Medical Centre at 14, Muhammadu Akije Street, Ejigbo, Lagos State. Hours after she was revived from death, she was still weak and writhing in pain.

Most annoyingly, her injuries were inflicted, not by an outsider, but by her relative, her second cousin named Bose Ola, who was her guardian. The story becomes most unbelievable in the light of the offence that earned her such gargantuan punishment. Overall, there is hardly a word to euphemize the ordeal other than to call it by its name––child abuse.

Speaking through an interpreter, Muyiba, 12, told Saturday Sun the incident of Saturday, November 18, 2017. “I saw N50 in the sitting room and I took it, not knowing that it belonged to Aunty Bose. Later in the day, when she asked about the N50, I denied seeing it, but when she said she was going to punish me, I told her the truth and apologised that it won’t happen again. I thought that the matter was over because she had accepted my apology. But she asked me to pull off my dress including my panties. I obeyed. She ordered me to lie on the chair. She brought out a cane, belt and stick for turning garri. She called Brother Rafiu (her husband’s younger brother) to assist her and they descended on me. After that, she lighted the stove and heated a kitchen knife and started to use it to sear my body”.

According to her, she fainted in the course of the torture and was rushed to the hospital where doctors revived her. Some neighbours who could not stomach the inhuman treatment reported the matter at Ejigbo Police Division. The police wanted to handle the matter with levity, but for the intervention of the Crime Victims Foundation of Nigeria (CRIVON), Gbagada, Lagos, which lead to the arrest of Bose and her subsequent arraignment at the Ejigbo Magistrate Court on one count charge of child abuse.

What did she do with N50? She told Saturday Sun: “I used it to buy biscuit and sachet water.” However, she refused to answer the question as to whether her madam starved her. The rest of her story can be read between the lines.

Muyiba––whose mother is reportedly the fifth wife of her husband––was living with her grandmother, but the family complained about her poor academic performance in school and sent her to live with her cousin, Bose.

Paradoxically, over a year after she arrived at Bose’s household, Muyiba was yet to be enrolled in any school.