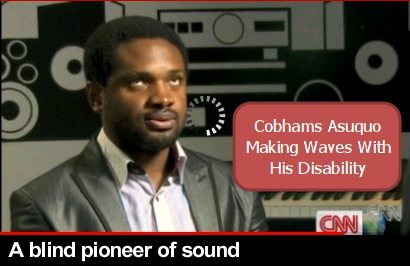 August 17, 2012 – How A Blind Man Turned His Disability To Success Story

Blind Nigerian musician, music producer and songwriter, Cobhams Asuquo has made history for helping talented individuals in Nigeria and his massive contribution to the music industry. naijagists.com

Watch his interview with CNN and savour the talent of a man who dared to listen to the beat of his heart..

Mrs Gladys Asuquo and her son, and singer, songwriter and music producer, Cobhams Asuquo who is now a husband and father, tell the intriguing story of how a blind kid turned his disability to a success story. Born like other normal children, Cobhams seemed perfectly normal until about three months after when his very observant mother began noticing his awkwardness. 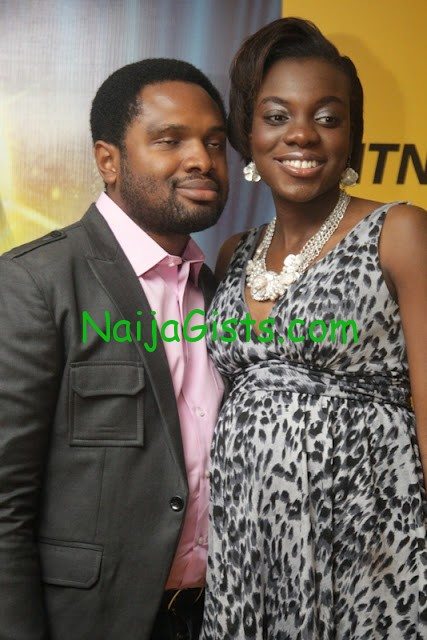 She quickly took him to the University Teaching Hospital in Ibadan from where they were referred to a hospital in Kano. There, her worst fears were confirmed; her son had been blind from the womb and nothing could be done to restore his sight

Rather than cry and blame God for her seeming ‘ill’ fate, Mrs Asuquo, who was a clerical officer in the army, resigned to take care of her son and prepare him adequately for a future she knew had to be great. It wasn’t easy at all. Her first responsibility was showing him that his blindness wasn’t a disability. “It wasn’t easy watching Cobhams do chores around the house and run errands like my other children but I resolved to make him as independent and capable of achieving anything he sets his mind to do.

I showed him where his box of clothes was and would ask him to go get his clothes after bathing him,” Mrs Asuquo says. These trainings came in handy when he had to move into the boarding school for his secondary education.

Cobhams’ father was an officer in the army and was hardly ever around so it was up to the mother to train and sometimes solely cater for her children. At some point, when he was seconded to Chad Republic, things became so unbearable that she had to boil and sell groundnuts to sustain the family. It was in the course of this that she noticed her son’s love for the drums. “He would beat on anything he could lay his hands on so I encouraged him by buying him musical toys. Cobhams never went to school to learn to play any music instrument; I think it was just an escape route for him,” she says.

She was therefore not surprised when he decided to drop out of the University of Lagos as a 300 level student of Law to face his passion full time.

Alongside the Asuquos, the mother of celebrated filmmaker cum actor, Kunle Afolayan, Mrs Omoladun Afolayan, shares her emotions, especially having to cope and cater for her kids while the patriarch, travelling theatre artist and filmmaker, Ade Love travelled round the globe. Born in 1943, Moladun got married at an early age to the handsome and famous Ade Love when she was quite young. Since her husband was always on the road and had other wives and children to cater for, preferring also to invest a lot in his art, each of his wives had the responsibility of caring for their children. A street ‘puff puff’ seller, who later ‘graduated’ into selling pepper soup, Kunle, her most famous child, was barely five years old when they were rendered homeless during the ‘Ghana-Must-Go’ era. These stories will feature in this week’s Celebrity edition of Supermom showing TV stations across the country.