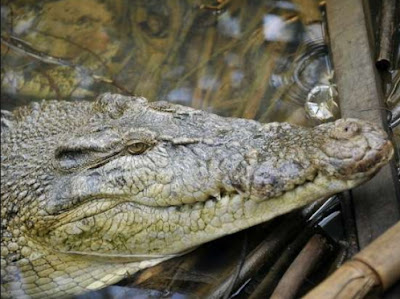 July 14, 2016 – How A Brave 12-Year-Old Indonesian Girl Rescued Sister The Moment A Crocodile Grabbed Her

Two young girls from Indonesia fought off a crocodile in a river in Sumatra’s Riau province, local media reported on Thursday.

Al, 12, and Cek, 8, escaped with a bite on the hand and on the leg, respectively, after they were attacked near their village of Sungai Iliran, in Indragiri Hilir district, AFP reported.

“The girls were bathing in the river when Cek disappeared underwater suddenly, before reappearing with her leg in the jaws of a crocodile,” their mother Minah was quoted as saying.

Al swam up to the crocodile and grabbed her sister’s arm.
The reptile released its grip on her leg, and Al was able to drag her to the river bank, but not before being bitten herself, on the hand.

“Both sisters then screamed for help and their mother came with other villagers to their rescue, they were treated at a local health facility,” the District Police Chief Wicaksono said.