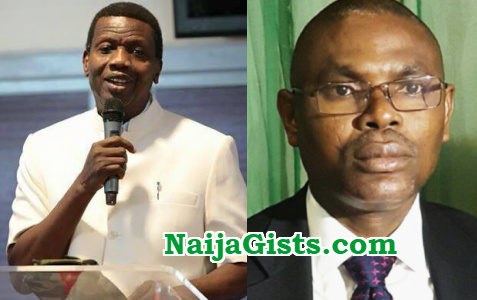 Since Sunday, January 8, 2017, the Financial Reporting Council of Nigeria (FRCN), formerly the Nigerian Accounting Standards Board (NASB), an organisation charged with setting accounting standards in Nigeria, has been in the eye of the storm.

Indeed, its executive secretary, Jim Osayande Obazee, became a subject of controversy when General Overseer of Redeemed Christian Church of God (RCCG), Pastor Enoch Adeboye, announced his stepping aside in the church’s leadership in Nigeria over a new law regulating Non-Governmental Organisations, where churches fall under.

Obazee had stoutly defended the new law, to the extent that he reportedly told church leaders, who complained about what they saw as government’s attempt to interfere in the “work of God,” that if they felt they should not be regulated they should “take their churches to heaven.”

Indeed, Obazee’s vehemence in enforcing the law on church and mosque stirred the hornet’s nest.

The new law had directed church and mosque leaders to resign their positions after 20 years in the saddle or after attaining 70 years of age. In obedience to the directive, Pastor Adeboye resigned last week as head of the Nigeria’s branch of the RCCG and appointed a national overseer.

When therefore, the FRCN boss was fired by President Muhammadu Buhari along with other members of the board, many remembered some of the controversies that had dogged his tenure as executive secretary.
Indeed, nobody would forget the allegation of corruption, sexual harassment and moral decadence, which rocked the FRCN in the past, when a staff of the Council, Mrs. Abimbola Patricia Yakubu, blew the whistle, accusing Obazee of sexual harassment, oppression, humiliation and intimidation.

A mother of three, Mrs. Yakubu, was for three years the Personal Assistant to Obazee. This controversy fizzled out, just as it came, as the FRCN former boss was said to be a confidant of former President Goodluck Jonathan and therefore, an untouchable in the last administration.

Obazee was again in the news when former Governor of the Central Bank of Nigeria (CBN) and now Emir of Kano, Sanusi Lamido Sanusi, was suspended by the Jonathan government.

Indeed, Sanusi’s suspension was based on the recommendations by the FRCN. Obazee was said to have rejected the responses by the former CBN governor to his query on graft, describing it as “a clear display of incompetence, nonchalance, fraud, wastefulness, abuse of due process and deliberate efforts to misrepresent facts on the part of the leadership of the CBN.”

However, many Nigerians had felt that the then President Jonathan had merely used Obazee as a tool to deal with Sanusi for daring to raise the alarm that over alleged missing $20billon at the Nigerian National Petroleum Corporation (NNPC).

Since Buhari came to power, Obazee had ridden on the back of a renowned Pentecostal pastor, who is a political ally of the President to remain on his job, despite the searchlight on him over management of the FRCN’s finances.

The Economic and Financial Crimes Commission (EFCC) had closely monitored his activities over legion of petitions. Indeed, a petition at the EFCC highlighted Obazee’s use of consultants in handling affairs of the agency and some expenditure.

Obazee was a pastor in RCCG before resigning to concentrate on his job as FRCN executive secretary.