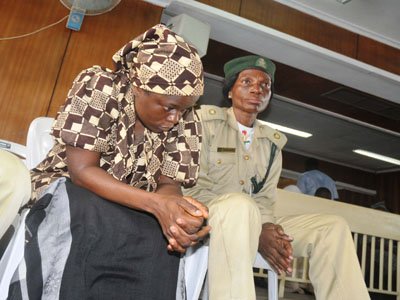 Yetunde Fatoki, the violent Ibadan-based lawyer who killed her husband last year has escaped death sentence after her victim’s autopsy report revealed that he died of shock from a sharp object.

The court held that although the evidence showed that she killed her husband, none of the witnesses established the intent of the accused or described seeing her stabbing the deceased.

The judge noted that the killing was done without intent, going by the fact that the parties were married at the time of the incident.

The accused stabbed her husband, Lowo Oyediran, in the neck on February 2, 2016 at their 30, Adeniyi Layout, Abidi-odan, Akobo, Ibadan home, following a misunderstanding.

Yewande, an official of the Department of Public Prosecution (DPP), Ministry of Justice, Oyo State, had been on trial since February, last year.

She was arraigned on a one- count charge of killing her man with a knife.

The offence was said to be contrary to Section 316 and punishable under Section 319 of the laws of Oyo State.

The accused pleaded not guilty when the trial began.

The judge said that with the evidence before the court, the convict and her late husband had frequently engaged in domestic violence.

He also adjudged the evidence of the couple’s landlord and wife, Mr and Mrs Akinpelu, as credible.

The landlord and his wife had told the court that they saw the convict holding a knife, while blood was flowing from the deceased’s body.

Justice Abimbola also said that he considered the autopsy report of Prof. Abideen Oluwashola, a consultant from the University College Hospital (UCH), Ibadan.

“According to the autopsy report, the deceased died as a result of shock from a deep wound caused by a sharp object,’’ the judge added.

The court said the evidence of the convict could not be relied upon, because her statement with the police was different from her statement before the court.