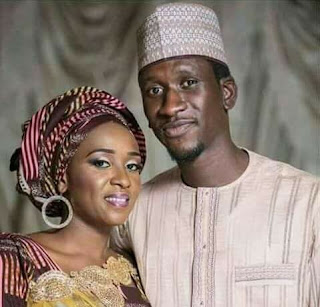 New facts emerged on Monday night on the case of the jealous wife, Maryam Sanda, who stabbed her late husband, Bilyamin Bello, the son of a former National Chairman of the Peoples Democratic Party (PDP), Mohammed Haliru Bello to death after she was prevented four times from carrying out the act.

It was also alleged that bloodstains in the couple’s flat had been mopped up and murder weapon cleared by unknown persons before homicide detectives stormed the place on Sunday.

The deceased also at the last minutes went to an ATM and withdrew cash to pay for the balance of the repair of his wife’s crashed car.

But Maryam was said to have demanded for a divorce with the threat of cutting off her husband’s manhood.

These facts were contained in the testimony of a witness, Habib Gajam (aka Gidado).

Gajam, who is a family friend, gave the graphic details of what transpired and how the embattled wife had tried to cover up the act.

Gajam said: “Today, I witnessed the most wicked and shameful display of arrogance in Bilyaminu’s death case.

“At about 9 to 10p.m. last night (Saturday), tension started to build between Bilyaminu and his wife, Maryam, at his residence.

“Maryam demanded a divorce with the threat of cutting off his manhood. Ibrahim Aliero, Bilyaminu’s friend (in whose instance the drama started) intervened four times to stop Maryam from stabbing her husband.

“Ibrahim called Auta (Maryam’s uncle) and Abba (Bilyaminu’s cousin), who had left the house moments before the drama started, to come and intervene.

“After a short calm, Maryam broke a bottle of groundnut and attempted to stab Bilyaminu, again, but this time he held both her hands and struggled to take the bottle from her, injuring himself in the process. Unrelenting and wild, she bit his finger.

“Uncle Auta had arrived this time to calm the situation. They both committed to Uncle Auta to let go of the grievances (at least for the night).

“After the situation had become calm, Bilyaminu and his friend went to the Pharmacy to get his hand treated from the bite he sustained from Maryam.

“They later went to the ATM and made a withdrawal to pay up the balance of a spare part for Maryam’s crashed car. By 11pm, Bilyaminu and Ibrahim had gone back to a calm home. Abba (Bilyaminu’s cousin) joined them in the living room.

“They stayed till almost midnight and decided to call it a night.

In the emotional piece, Gajam related the parting words of Bilyamin to his cousin and others.

He also captured attempts by the detained wife to change the story at the police station in order to cover up her crime.

The witness said: “When Bilyaminu was seeing them off, he told Ibrahim that ‘I don’t want to go back until she’s asleep’. They called it a day. Abba and Ibrahim left.

“At around 2pm Sunday afternoon, family members were summoned to Maitama Hospital, where Bilyaminu was lying in a pool of his blood with multiple stabs on his chest, shoulder, a deep cut on his inner thigh and many bite wounds on his stomach.

“Maryam had confessed to stabbing him to the hospital authorities. Maitama Police Station was the next point of call.

“At Maitama Station, where Maryam was asked to write her statement, story changed. She claimed they got involved in a fight and Bilyaminu sustained injuries from a broken Shisha pot and that she never stabbed or hit him.

“She was later taken to the FCT Command in Garki II for further investigation. The police commissioner instructed that the crime scene should be visited.”

Gajam explained: “To the amazement of Abba (Bilyaminu’s cousin) and Ibrahim (his friend), who are key witnesses in the investigation, bloodstains had been mopped up, murder weapon disappeared, but flower vases and shisha pot were broken to corroborate Maryam’s earlier statement at the station.

“In the midst of this tragedy and confusion, Maryam had the audacity and courage to change her story. More disgusting is her lack of remorse and respect for the victim’s family.

“Someone, who divorced his first wife to be with you doesn’t deserve this. #JusticeForBilyaminu shall be served by the Almighty Allah on the day of resurrection.

“May Allah grant Bilyaminu Jannah and bless the life of his eight months old daughter, Sa’adatu.”