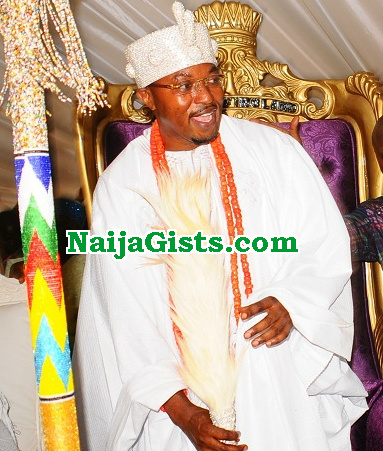 The new monarch of Iwo town in Osun state has come under fire for allegedly abandoning his eight children and their mothers after he found love in a Jamaican lady originally born in Toronto Canada.

King Adewale Rasheed Akanbi who abandoned his wife in Canada last year is said to have stopped taking care of the eight children he’s fathering with three different women.

According to an insider, Oba Akanbi is the biological father of two young boys (16-year-old Malik and 13-year-old Anjola Akanbi). Their mother named Jumoke claimed the monarch has stopped taking care of the boys since he met his Jamaican Queen.

He also has a set of triplet with a Nigerian woman named Fadida Williams in Nova Scotia Canada. They are now 10 year old and have not seen their father since he abandoned them.

Another lady he married in Nova Scotia Canada, Lynn Akanbi is the mother of Kenya Akanbi who is now 7 year old.

His last wife whom he abandoned before fleeing to Nigeria with his Jamaican girlfriend, Asabe has two boys for him. King Akanbi has allegedly refused to pay their child support also.

One of the women he allegedly abandoned is threatening to release his arrest mugshot to the media in order to prove to Nigerians that the monarch is not a responsible man many perceived him to be.

He was reportedly arrested for drug possession with the name Segun Adeonigbagbe in the United States before fleeing to Canada some years back.