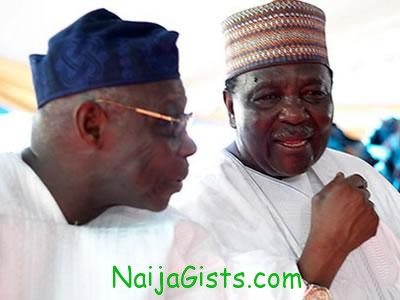 Some eminent Nigerians, including former Head of State Gen. Yakubu Gowon, former President Olusegun Obansanjo and former Head of Interim National Government Chief Ernest Shonekan, yesterday said the country can only develop when its systems and institutions are strengthened.

They said the judiciary must be ripped of corruption; the rule of law must be respected; and due regard must be accorded democratic institutions.

They also said the country must ensure that “rogues and armed robbers” do not assume public offices.

They spoke at the Fourth Annual Conference of the Academy for Entrepreneurial Studies Nigeria (AES) in Lagos. It had the theme: Strong systems: Necessity for Building a Virile Nation.

Gowon said for a system to work, it must be visionary and evolutionary.

He said: “It must recognise and be tolerant of opposing views. A leadership cannot make progress if it only relies on the echoes of its own voice.”

Obasanjo wondered how the country’s value system worsened years after independence. He recalled that when he bought his first car as an army Lieutenant, a panel was set up to probe how he raised money to buy a brand new Ford Tanus.

“That was after independence. How did we lose that?” Obasanjo asked. He said it was because things were taken for granted.

The former President said after he left the army, he once overheard a colonel asking a major to give him keys to his (the major’s) London apartment to stay.

In the past, such a thing would not be allowed in the army without questions being asked.

Obasanjo said: “There was no sanction. We took it for granted. Now, it is difficult to change things. These things happened in our korokoro eyes ( presence).”

On the judiciary, Obasanjo said corruption still remains among judicial officers. “We removed some corrupt judges, but not all of them.”

According to him, corruption persists in institutions such as the judiciary, police and National Assembly because “rogues and armed robbers” are allowed into public offices.

He said: “The diligence undertaken before a judge is appointed is no longer undertaken. The same applies to other institutions. What we have are more rogues and armed robbers in the state Houses of Assemblies and National Assemblies. What sort of law will they make?”

The former president said if the weight of evidence dismissed by a Nigerian judge was used to secure a conviction for corruption in the British judiciary, it means that “the judiciary is now riddled with corruption.”

According to him, amidst the corrupt system, there are still those who are different.

He said: “Let’s understand and even sing-song the good ones. When we find things that are good, let us applaud them.”

To Shoenakan, there is no reason why Nigeria should not be a leader on the continent, being the most populous black African country endowed with abundant resources.

He said the resources have not been properly harnessed for the benefit of all; rather there has been over-reliance on oil.

“We must diversify the economy away from oil and gas,” he said, adding that several solid minerals have been left untapped:

Shonekan said: “We need to have more of the Nigerian Liquefied Natural Gas (NLGN) in this country.

“Let us also embrace space technology to improve our telecommunication system and forecasting.”

Shonekan said much cannot be achieved if the government does not create an enabling environment for the private sector to thrive; if infrastructure remains at its present decadent state, and if the level of security remains low.

Justice Uwais said Nigeria needs “a strong judiciary” to work. The judiciary, he recalled, started on a strong footing following colonialism and independence, but is now bedeviled by corruption.

He urged the National Judicial Council (NJC) to do more in tackling judicial graft.

He said: “The problem of corruption has also spread to the judiciary. There is need to do something about it.

“When I was CJN, quite a number of judges were removed from office because they were found wanting. Now, the impression is created that judges who are corrupt are allowed to go scot-free.

“We need a strong judiciary to guarantee to guarantee a strong democracy and economic and socio-political development. Therefore, all must be done to bring the judiciary back to its days of glory.”

Fashola said citizens must continually question themselves as to their roles in subverting the institutions.

He said: “The institutions have operated sub-optimally. It is not all men and women who can build institutions. Such a person must have character, compassion and selflessness.”

According to him, the judiciary will not perform efficiently until there is federalism in the administration of justice.

“The question of a state police is not about if, it is about when,” Fashola said, adding: “Institutions will endure only if we re-access our own values.”

Prof Sagay said a strong legal system is the answer to Nigeria’s problems. However, there is nothing wrong with the laws, he said.

According to him, the problem is with the political class who, he said, have “neutralised and rendered prostrate our laws.”

He recalled the subsidy scam, and alleged looting of the pension fund, saying: “People steal pension funds while ageing pensioners die on queues.”

He added: “The quality of the political class has fallen. Nigeria has become a value-deficient society. Our history of rigging has no precedent anywhere in the world. Strong laws have nothing to do with it.”

Continue Reading
You may also like...
Related Topics:Gowon, how nigeria can work, nigeria, obasanjo