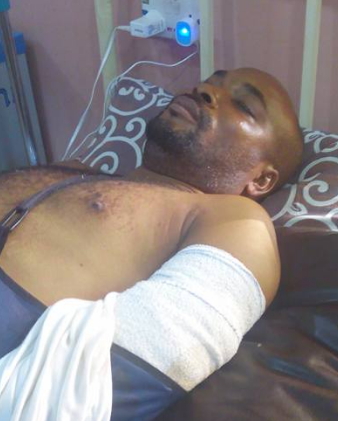 Feb 22, 2017 – How Pregnant Wife Of RCCG Minister Kidnapped From Eliasa Farm In Epe Lagos Rescued Him

Heavily pregnant Mrs Sandra Aguveso on Tuesday relieved what she went through to facilitate the release of her husband by kidnappers last January 26.

She said she trekked several kilometres into Epe forest to drop the ransom cash, bought recharge cards and beverages so that the kidnappers won’t kill her husband, Jonathan Aguveso, 43.

Aguveso, a Minister at the Redeemed Christian Church of God (RCCG), was shot on his left arm on January 19, before he and three workers were whisked away from Eliasa Farm, Epe.

According to the woman, Aguveso had gone to the farm around 9am to buy eggs, which they usually supplied to their customers, but was kidnapped, shot and taken into the forest.

Aguveso has been on admission at a hospital since January 26, with doctors battling to save his arms.
Twelve steel balls were removed from the arm by a local doctor before he was taken to a specialist hospital where two more pellets were found on the right side.Aguveso is expected to undergo series of surgeries and spend at least three months in the hospital.
Mrs Aguveso appealed help to underwrite the about N1 million hospital bill.

There’s another surgery he said we have to do in three months and that one would cost N500,000.

Then, the cost of staying in the hospital per night is N2,500 and we have to be there for three months. Everything is over a million.

I am appealing to Nigerians to assist us because we don’t have money. I have used up our savings already.”

Mrs. Aguveso said the kidnappers asked for N15million for her husband’s release, but collected N500,000 which she borrowed.

She was asked to take the money to somewhere in Epe, but when she got there, the kidnappers told her to pick a motorcycle and proceed to Igbodu.

“The motorcyclist who took me to the area refused to stop when I sighted the clothe the kidnappers had asked me to stop by along Epe-Igbodu road. Instead, he drove to the nearest community by the roundabout and raised the alarm that I was working with kidnappers. I couldn’t tell him my mission since the kidnappers had threatened to kill my husband, come to my house and finish my entire family if I said anything.

“So, I was just begging that I am not a kidnapper and don’t know them. That I was looking for someone and it was the person who asked me to stop there. That I don’t know what the man was talking about. The bike man now left me at the roundabout, collected his money and left.

“The kidnappers were calling and asked me to start trekking down until I got to the clothe before branching into the forest. I trekked several kilometers before I got there. I was afraid but saving my husband’s life was my priority. I wrapped the N500,000 ransom I was able to generate into farm clothes and dressed like a farmer so that no one would accost me on the road and collect the money.

“When I got to the clothe, I couldn’t branch because vehicles were passing. I didn’t want them to say I led spies or police to them. So, I explained to them that I would have to pass the place a bit and then return after the vehicles had gone, which I did.

“When I entered the forest, I walked until I came to an under bridge, where I heard gunshots. There, I saw two men. One of them was fair. They didn’t wear mask and they were holding guns. They asked me to stop there and I did.

“So, when I got there, I dropped the things with them. But as I bent down to drop the money, I saw about seven other armed men inside a boat. They told me to turn back that I would meet my husband on the road. But when I got to Epe roundabout without seeing my husband, I called the number they were using to call me. The number is registered on Truecaller as VM Abiodun.

“They picked and told me to go home. I now asked if my husband would be able to get home and that what if he didn’t have transport fare but they said I should go home that they would give him transport. That he was still weak from the gunshot injury and was receiving treatment.

“So, on the seventh day, the farm owner called my brother-in-law to ask if we have seen my husband because they have been released. We said no and became worried. This was around 6pm. I was crying and wondering what might have happened to him but around 9pm, someone knocked on the door and when we opened, it was my husband.”

Mrs. Aguveso said she quickly went in search of a hospital that can treat the gunshot injury since the bullet has been inside his body for seven days. 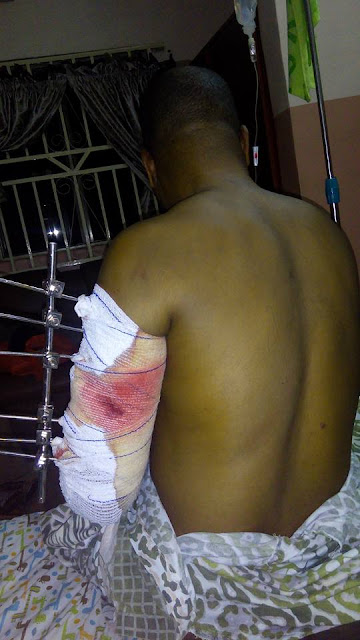 She said her husband disclosed that he hasn’t drink water for six days and that the kidnappers warned him to not drink water until the bullet was removed. 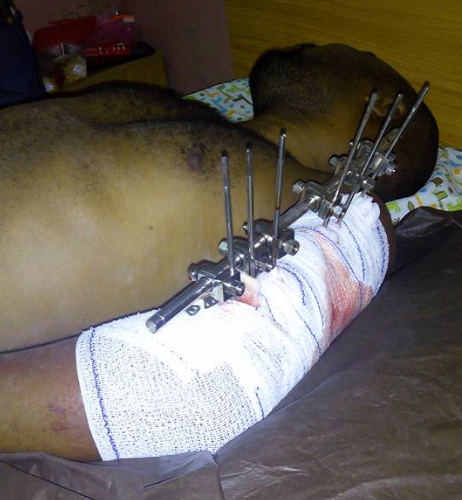 “He said they also gave him a local concoction to drink in order to stop the effect of the bullet. That we should get a hospital or a nurse to treat him properly. But neither the hospital I went to nor the private nurse agreed to attend to him without police report. They said they won’t treat him.

“I had to contact the Divisional Police Officer and he told the nurse to treat my husband that we would get the report in the morning. When we got it, we were directed to a doctor who extracts bullet locally and he removed the steel balls.

From there, we went to Epe General Hospital but when their surgeon wasn’t forthcoming, we were referred to the specialist hospital where he’s been all the while.”