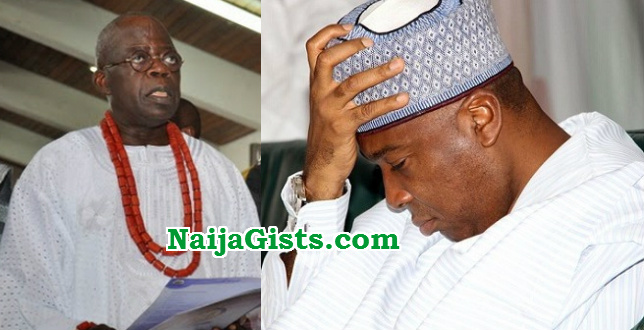 August 4th, 2015 – How Tinubu Embarks On Suicide Mission By Trusting Bukola Saraki Who Allegedly Killed His Own Father With Betrayal

This is an exclusive report by Global News

Every Nigerian knows that presently, the crisis within the ruling All Progressives Congress (APC) is getting messier on daily basis. The embattled national leader of the party, Asiwaju Bola Ahmed Tinubu has been somehow relegated to the background of late. Many meetings of the party have been held without spotting him in recent times. This issue, however, has somehow caused confusion in the country as Nigerians are pointing accusing fingers at some politicians from the two biggest parties the APC and the opposition PDP.

But, Global News can inform you that the major person behind the sudden ‘disgrace’ of the one-time leader of the APC is ex-Kwara State governor, now Senate president, Bukola Saraki. Known for his many betrayal attitudes, Saraki once betrayed his own biological father because of his greedy political intention. It could be recalled that Bukola Saraki fought his father tooth and nail forgetting that the man was responsible for all his education. He did this until the old man of Kwara politics gave up the ghost perhaps from the shock of Bukola’s betrayal.

Before then Baba Oloye used to tell many people that all those he helped to be governors at one time or the other betrayed him but his son, prior to the 2003 election would never betray him. Many political watchers in Kwara State attributed the death of the Wazirin Ilorin to the wickedness of his own son, Bukola.
During the lifetime of his father who also dominated the political terrain of the state, Bukola also fought heavily with his younger sister, Gbemisola because of the latter’s intention of emerging as the first female governor in the state. Gbemisola’s ambition suffered due to the stubbornness of his brother who never cared for her life and for her and the family dynasty all in the bid to emerge as the powerful politician after his father and he succeeded in disgracing his father.

Bukola Saraki has suddenly turned to an ‘Idi Amin’ in Kwara politics and also a ‘do-or-die’ politician who wants to get everything he desires by all means regardless of whatever it takes, even if it is human life.
However, in the Lagos political circle where Tinubu reigns supreme and where he also emerged as a national political leader, politicians in the state are beginning to grumble as to why Bukola Saraki could have the guts to betray Bola Tinubu. Some segments of the APC and the Lagos politics are saying that it was the Asiwaju himself who caused his problem.

They affirmed that Tinubu should have carefully studied the past antecedents of Saraki right from how he dealt with his father and his other family members. This alone should have cautioned Bola Tinubu before embarking on the suicidal mission of giving Bukola Saraki then support he gave to him in the Nigerian politics to the detriment of other more loyal politicians.

Another political analyst claimed that it was Tinubu that underrated the political sagacity of Saraki and his ambition to become the senate president, and if the future allows him, the president of Nigeria.

And Tinubu will be too small for him to deal with having succeeded in giving his father the upper jab that culminated in his death having been in and out of the hospital before he finally kicked the bucket owing to the rude and cruel shock his son gave him.