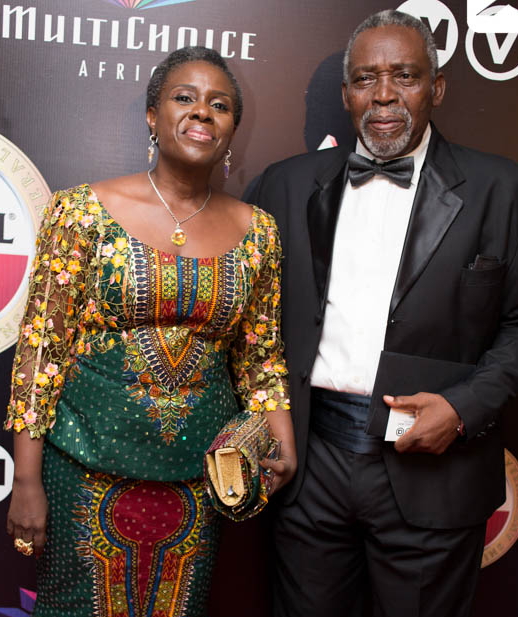 Not only is Olu Jacobs and his wife Ajoke Silva the most popular couple in Nollywood, they are also among the longest married veteran actors in Nollywood.

In a recent chat with NET, the couple revealed how they met each other, how they resolve conflicts and the secret of their successful marriage.

Olu Jacobs: How I Met My Wife, Joke Silva

I was having a meeting at the National Theatre and the door opened a young lady came in. I looked at her. I have never met her before in my life and I said to the people in the room ‘ladies and gentlemen, this is the lady I am going to marry’. Everybody laughed. She looked at me up and down, hissed and left. Today, she is my wife and that was over 27 years ago.

The Secret of Long-Lasting Marriage

It is God. There are other forces outside that you need to take cognizance of but when you do, you have to make sure that they don’t take control over your life. You are now thinking for two. No decision you take should be for yourself alone. It’s for two and it must remain for two. You have to always remember that. If my wife goes out, and she finds out that she would not be able to make it back at the time she initially thought she would, she picks up the phone and calls me to tell me. Fine! You are thinking for two, she knows where I am, I know where she is. We still do this till tomorrow. Communicating like that helps a lot, once we are talking, you have an idea of where I am and I have an idea of where you are. I am not saying that it should be every minute calls. Sometimes just being together in a room not necessarily saying anything is also important.

How We Resolve Conflicts

You learn not to pick on anything your partner says. It interferes with the relationship. If something happens and you want to discuss it, discuss it till the two of you resolve it. Why won’t we argue? I have a mind, she has a mind so why shouldn’t we argue. We must argue but as we do so, we must finish up that argument so we can start another one. We must quarrel, it is resolving it that is the task. Anybody can fight but how many can sit down and resolve it? You must finish one fight before another and you cannot jump because if you jump it will pull you back. We thank God and pray to him to continue to guide us and give us the wisdom to relate properly, and to be as fair and honest as possible. Apart from that, we just take it as it comes.

Why My Wife Joke Silva Maintained Her Maiden Name

She is her own individual. When I met her, she was an actress known as Joke Silvaso why should marrying me now deny her and her audience her name. She is Miss Joke Silva who is Mrs. Joke Jacobs. It is as simple as that. People now begin to say what they like. They have even written that we are separated and all sort of stuffs. When she is working, she is Joke Silva but she is Mrs. Joke Jacobs at home.

What I Likes / Dislikes About My Wife

Sometimes, she insists on things. Even when we have resolved it, she will still bring it back. She thinks more of others. She will think of you and remind you of things that need to be reminded of. She is always happy to help anybody. For her it’s not an effort. She cares a lot and of course, we are all boys in the house so she mothers all of us. That’s the way, we handle it, so whatever we need to do, we discuss it.

Joke Silva: The Secret Of Our Successful Marriage

A Toast To My Husband Olu Jacobs

Olu Jacobs is a troublesome human being (laughs), he is amazing, he is charming, he is caring. Olu would work so hard to take care of his family before even remembering himself. In fact, he is an amazing man and I have been blessed.

Sometimes, Olu calls me ‘Omo’, sometimes he calls me ‘honey’ or any name that comes to his mouth depending on how he is behaving at that point in time. Sometimes, I call him his full name and when I do that one, you know there is ‘Wahala’ (laughs). But he is a wonderful man. He is full of life and fun.

Photos: Fathia Balogun, Iyabo Ojo, Liz Dasilva & Others At Mide Martins Movie Premiere
How Tinubu Embarks On Suicide Mission By Trusting Saraki Who Betrayed His Father At Point Of Death