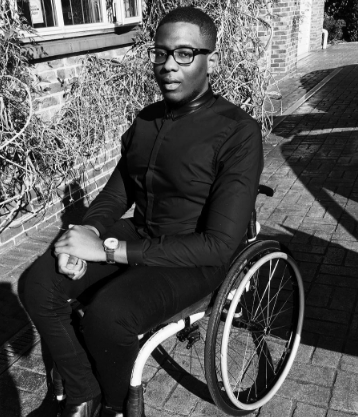 January 17, 2017 – How To Limit Your Limitations – Inspirational Article By Adebambo Gbenga

“The only disability in life is a bad attitude.” – Scott Hamilton

Life’s adversity is simply a proof that the enemy considers your assignment very achievable. In life, there is no disability, we are only differently abled! In spite of adverse circumstances, ordinary people have risen to be great. The key is in our decisions, not our condition. Adebola Daniel, the physically challenged son of the former governor of Ogun State, Otunba Gbenga Daniel, once said, “Disability is not the end but just a different path”.

Adebola Daniel is the founder of Debola Daniel Foundation(DDF). A foundation that is committed to ending the stigma attached to people living with disabilities, through working with government to create inclusive policies that covers the main sectors of Education, Employment and Empowerment of disabled Nigerians. At the moment, the foundation is working on a social media campaign under the hashtag #DisabledNotUnable.

Adebola, who has a Masters in Mechanical Engineering from University College London(UCL), is an inspirational speaker with TEDx Talk and Co-founder of the African Youth Initiative. He is the managing director at Kresta Laurel UK limited, an engineering consultancy company. In addition to that, he is the co-owner of iDEY! Limited, an online presence dedicated to providing a hub for the youth in the British diaspora.

Confined to the wheelchair at an early age, the resilient and undaunted young man has grown beyond the confine of his wheel chair to becoming a voice for children and youths with disabilities. He has this to say about the vision of his foundation: “The vision of the foundation in the long term is to seek an end to the stigma attached to being physically-challenged and to change the mindset of both disabled and non-physically-challenged citizens to push the notion that disability is not inability. Our objectives are to promote education, employment and entrepreneurship within disabled Nigerian citizens, while taking a top-down approach to discussing and influencing policy that affects disabled citizens.”

Adebola was born into a very comfortable home, with both amazing parents and without a disability. Abraham Lincoln said, “You have to do your own growing no matter how tall your grandfather was”. However, when he turned 5, he was diagnosed with paraplegia- a rare condition with no medical clarity. He became confined to a wheelchair. Though crippled in the body, he self-talked and sweet-talked himself into believing that he was not crippled in the mind! Growing up in Nigeria for the little Daniel was both tough and demanding but he became tougher. He was excruciatingly exposed to the stigma and assumptions that came with being ‘disabled’ but vehemently refused to be looked down upon with pity, judgement and sometimes resentment. One of the most painful things about disability is that people see your disability before seeing you!

The 3rd President of the United States of America, Thomas Jefferson, believed strongly in the supremacy of human attitude over ability when he said, “Nothing can stop the man with the right attitude from achieving his goal, nothing on earth can help the man with the wrong mental attitude”.

Otunba Gbenga Daniel was so much full of joy and gratitude to God when he posted on one of his social media platform some few weeks ago on the dauntless strides of his son in his academics. The overzealous and enthusiastic former governor said, “My physically challenged son, Adebola Daniel just got a Distinction in his MSc (Mechanical Engineering) at UCL”. The young Daniel bagged a BSc (Mech Engr.) from University of Surrey before going over to UCL for his Masters.

Great minds are greatly challenged. As the 32nd president of the United States of America, Franklin D. Roosevelt served longer than any other president. His unprecedented election to four terms in office will probably never be repeated due to the 22nd Amendment to the Constitution of the United States shortly after his death. Although he was crippled by polio at the age of 39, Roosevelt made impact on a wheelchair. Roosevelt was elected twice as a senator (New York). He was elected the Governor of New York in 1928 (the Governor on a wheelchair). Many New Yorkers were unaware that their Governor used a wheelchair. His wife once said something to him that always kept him going: “No one can make you feel inferior without your consent “.

Franklin Roosevelt ruled America for 12 years through the Great Depression and the World War II. His pioneering social programs during the Great Depression redefined the role of government in Americans’ lives. His role during World War II established the United States’ leadership on the world stage. His 12 years in the White House set a precedent for the expansion of presidential power and redefined liberalism for generations to come.

I want to specifically reach out to all the youths out there facing challenges because of their ‘disability’, rise above it! You are not inferior; you are divinely packaged to make maximum impact in life and eternity. Don’t allow anybody to look down on you; don’t encourage people to throw out a ‘pity party’ for you. You are an unrepeatable miracle. You are unique and valuable. Don’t ever allow your conditions to determine your destination.

I dedicate this piece to all the physically challenged youths out there to look deep within and limit their limitations. My general advice would be: concentrate on things your disability doesn’t prevent you doing well, don’t regret the things it interferes with and never look down on your ability. Your value doesn’t decrease based on someone’s inability to see your worth and the greatest disability in life is a bad attitude.

Arnold Schwarzenegger redefined the meaning of strength when he said, “Strength does not come from winning. Your struggles develop your strengths. When you go through hardships and decide not to surrender, that is strength.”

When you have a winning attitude, every challenge becomes an adventure. Not just a mere adventure but an adventure to your success.

A winning attitude converts a mess into a message, scars into stars, trials to triumphs, bitterness into ‘betterness’, frustration into fuel, misery into ministry and adversity into advancement.

We must all hold ourselves to a very high level of responsibility when it comes to relating with the physically-challenged. See the person and not the disability!

QUOTE OF THE WEEK: “Our lives depend on decisions and not conditions” -Victor Frankl

Continue Reading
You may also like...
Related Topics:how to limit your limitations