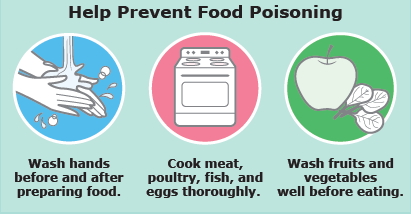 December 22, 2017 – How To Protect Yourself From Bacteria Causing Food & Water Poisoning

You may be forgiven to think that cholera no longer exists. In my teen years, cholera was a scourge in Nigeria so much that a very popular Juju musician ensured as part of his campaign to prevent the illness from spreading, sang an indelible memorial songs to cholera. Folks who lived through the 1970s and 1980’s will recall some of these songs.

Cholera is a state of acute diarrhoea caused by a bacterium called Vibrio cholerae. Like all food and water poisoning, the disease of cholera develops from contamination of our food and water. About 140,000 people die of cholera yearly, world-wide.

I had earlier explained last week’s, what is meant by incubation. In the case of cholera, the period is about 12 hours to five days. Few infection, if any, kills faster than cholera by reason that cholera drains the individual of water and nutrients within hours of its onset and death could set in speedily. Cholera kills faster than the deadly and fearful Ebola. It affects both adult and children and like most illnesses, children are often most severely affected.

What are the symptoms of cholera? It should be noted that not everyone who contracted the bacteria will progress to illness. Some may just feel ill in a mild way. In minority of cases, the symptom can be very severe and sudden: the principal symptom is watery diarrhoea— frequently going to move the bowel. Nothing stays in the gut. The songs which I mentioned above, made mention of frequent watery stools and bullet –like vomiting that shoots out of mouth. While vomiting may occur, the principal problem is diarrhoea.

Thank goodness that cholera can easily be treated once recognised. The key is to rehydrate the sufferer. Therefore, everyone should be aware of and know how to prepare oral rehydration therapy (ORT). All nursing mothers should also take note of how to prepare ORT (or ORS). For cholera patients, the World Health Organisation/UNICEF ORS standard sachet is to have one sachet of ORS dissolved in one litre of clean water. The water could be boiled water that is allowed to cool down and the ORS poured in. Alternatively, ORS can be prepared by adding five cubes of sugar (five level of teaspoon) plus one level spoon of salt into one litre of water. Adult patients suffering from cholera may require up to 6 L of ORS to treat moderate dehydration on the first day.

Other patients that are severely dehydrated will require intravenous fluid being given rapidly. For children, breast feeding should be continued and antibiotics be given to both adult and children.

Again, as in the case of all food and water poisoning, prevention steps are very important in dealing with cholera and all forms of food poisoning.

Cooked food that is stored anywhere, such as rice stored in the fridge, should be reheated thoroughly before eating. As in typhoid, clean your hands well after defeacating. Consuming only clean water and well-cooked food is the key to preventing cholera. Boil the water if necessary. Infected food handlers should be excluded from making or handling food until he or she is clinically cleared of the infection.

However, like most things that is wrong with Nigeria, enforcement of basic rules and laws by designated responsible persons in private and public domains is clearly the weak point in any effort to deal with and reduce food poisoning illnesses.

Cholera can be prevented by vaccination. There are three types of vaccines. All three require two doses for full protection.

Other Bacteria Poisoning Our Food:

In general, our food and water should not contain hostile bacteria, parasites and viruses. Any time we consume such germs, we will fall ill. Other bacteria that commonly affects our health through our food and water are E.coli and listeria.

No matter the bacteria, the important thing we should be aware of is to maintain personal food hygiene, wash and clean our vegetables, reheat cooked food that had been stored and avoid street-vendor foods. We should also take note that the mere fact that a food chain on the high street, is popular does not give it a clean slate. We should exercise discretion in our food choices.