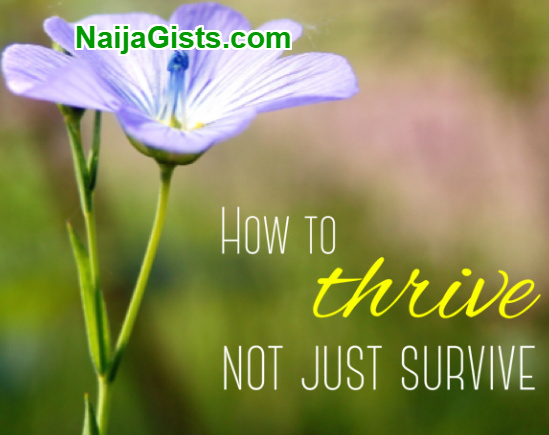 January 6, 2017 – How To Thrive In Recession – A Motivational Article By Adebambo Gbenga

Dani Johnson once said, “No matter what economy we are living in, there’s ALWAYS opportunity’’. Recession is not a verdict; recession is a choice! In the midst of dwindling national income and nagging recession, the fate of many in 2017 will ultimately be determined by their ability to intelligently navigate through with what I will like to call, ‘THE EDGE FACTORS’. These are critical steps that are recession proof and will give many people an advantageous edge over others. It is undoubtedly true that 2016 has been a tough and tumultuous year and if the predictions from economic gurus and experts are anything to go by, it has been speculated that 2017 will be tougher! Most people seem to expect the government to “do something” to end the recession but the truth is that recession is not government-made and it can only be overcome through personal, collective and corporate interventions.

I want to categorically say that recession is not the problem; our attitude towards recession is the problem. This is a time to look inward because we all carry within us a special form of currency that does not depreciate. In my years as an entrepreneurship coach and mentor on some entrepreneurship platforms, one of which is the Tony Elumelu Entrepreneurship Programme (TEEP). I have been able to glean some basic principles and I will be offering some professional advice that will make you economically tough, intelligent and prudent for 2017.

MONETIZE YOUR HOBBIES: Your hobby is your ‘natural’ business. Hobbies are those activities we’re so passionate about that, not only do we do them without getting paid, we often pay to do them. I am here to tell you that you can flip that around. You can actually get paid to do the same activities you already love to do in your spare time. One of the major reasons why people are so poor is simply because they give too much of themselves away for free! There is tremendous joy in earning income from doing something that you might happily do for free. Blogging was a hobby for Linda Ikeji but today, she earns a fortune from it. Hobbies like photography, writing, cooking, baking, home or office organizing, drawing and painting can be metamorphosed into money-spinning ventures. Walt Disney’s love for sketching and drawing created one of the most vast entertainment company now known as the Walt Disney Company. KFC (Kentucky Fried Chicken) was born out of someone’s hobby of cooking!

PURSUE YOUR PASSION; NOT YOUR PENSION OR SALARY: Joseph Campbell once said, “Follow your bliss and the universe will open doors where there were only walls.” Real financial security and freedom is not in your job but in your passion. In 2017, make your passion your profession. The illusion of salaries, jobs and pensions has stagnated the pursuit of many for excellence and impactful adventures. The world seems to conspire against our passion, by draining it and presenting us with ‘baiting’ opportunities that finally kills it. I painstakingly took my time to go through the list of the Forbes richest men, there was only one thing all of them had in common—they all pursue their passion! Howard Thurman said, “Don’t worry about what the world needs. Ask what makes you come alive and do that, because what the world needs is people who have come alive.”

DESIGN A PRODUCT TO SOLVE A PROBLEM: The brands that will thrive in the coming years are the ones that have a purpose beyond profit. In 2017, don’t find faults; find remedies. Everyman is born to be a solution to a problem. Great men are problem solvers; they became great because they consistently solve problems. Indeed, great men solve great problems. Stop looking for money, look for problems and solve them; money is the reward you get for solving someone’s problem. The basic question to ask ourselves is this: what product am I going with into 2017? Aliko Dangote, the richest man in Africa said, ‘’every morning when I wake up, I make up my mind to solve as many problems, before returning home.’’ Dangote was passionate about solving problems and undoubtedly became the richest in Africa.

‘’Goals must never be from your ego, but problems that cry for a solution.’’ –Robert H. Schuller

BE A CONSULTANT: Richard Branson said, “If somebody offers you an amazing opportunity but you are not sure you can do it, say yes- then learn how to do it later!” Being a consultant is simply knowing where and how to find the right information, resources and right people. You don’t need to know everything. Your ability to organize people that are more intelligent than you are to solve a problem is priceless.

NETWORK WITH PEOPLE OF LIKE-MINDS: The right people are worth everything! Robert Kiyosaki said, “The richest people in the world build networks; everyone else is trained to look for work”.

Your network determines your net worth; without great friendship, life is virtually bankrupt. Rich people are greatly connected and people that find their way to the top value relationships. 2017 is a year to audit your relationships and connect more with people of like-minds. Increase your network and connect more with people that are valuable to your destination. LinkedIn is a very good platform to connect professionally with people of like-minds. When a man fails in life, his friends are the first set of suspects. The real identity of a man is not to be measured by performance but relationships. Brian Tracy said, “Your choice of people you associate with will have more impact on what you become than any other single factor”.

INCREASE YOUR ASSETS AND REDUCE YOUR LIABILITIES: The rich has more assets than liabilities, the reverse is true for the poor. Invest more in assets in 2017. One liability that is more sapping than any other is a bad attitude. Rev. Olusola Areogun said, “The greatest liability in life is a bad attitude.

GET A COACH AND A MENTOR: It will be extremely unwise to go into 2017 without a coach and a mentor. Zig Ziglar said, “A lot of people have gone further than they thought they could because someone else thought they could”. A coach will stretch you beyond your comfort zone and help you realize your latent potentials. Costly and damaging mistakes can be avoided when we allow ourselves to be mentored by people that are more matured and experienced in our field of endeavours.

BECOME MORE FINANCIALLY INTELLIGENT: Will Smith said, “We spend money that we do not have, on things we do not need, to impress people we do not like”. There is no freedom in 2017 without financial freedom. You need to design an investment and saving plan for 2017. What you save today will keep you safe tomorrow.

MAKE YOUR HEALTH A PRIORITY: The greatest wealth is health. Invest more in your mental, emotional and physical health. Don’t ever compromise your health in 2017.

Albert Einstein said, ‘’problems cannot be solved by the same level of thinking that created them’’, we are in serious need of youths that can think differently. Youths that will proffer solutions to the avalanche of problems that have beleaguered the nation. Discover the one thing you were created to be, and be willing to pay the price to be it. In 2017, don’t just survive, thrive!

QUOTE OF THE WEEK: “If you don’t design your own life plan, chances are you’ll fall into someone else’s plan. And guess what they have planned for you? Not much.”—Jim Rohn

Continue Reading
You may also like...
Related Topics:how to thrive

How To Make 2017 Your Most Productive Year Ever
Sunday Inspiration: How To Experience A Happy 2017