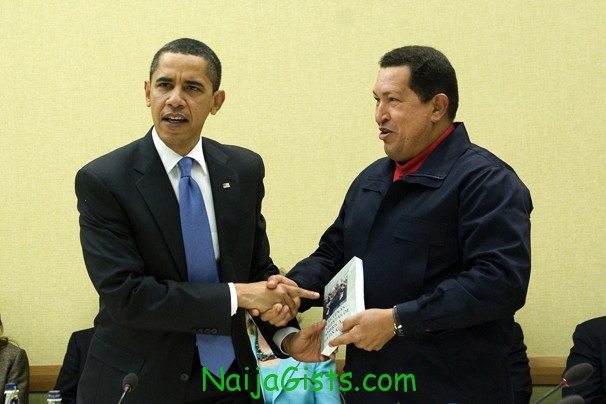 Dec 30, 2011 – Hugo Chavez Accuses The US Of Infecting South American Leaders With Cancer

Venezuelan President Hugo Chavez has ignorantly alleged that the U.S. may be behind a “very strange” bout of cancer affecting several leaders in South America.

Chavez, made this remark a day after Argentine President Cristina Fernandez de Kirchner was diagnosed with thyroid cancer, alleged the CIA was behind chemical experiments in Guatemala in the 1940s and that it’s possible that in years to come a plot will be uncovered that shows the U.S. spread cancer as a political weapon against its critics. www.naijagist.com

“It’s very difficult to explain, even with the law of probabilities, what has been happening to some of us in Latin America; would it be so strange that they’ve invented technology to spread cancer and we won’t know about it for 50 years?”

Chavez, diagnosed with an undisclosed form of cancer in June and had a baseball-sized tumor removed in Cuba, has called for a regional summit of leaders who have battled cancer including Brazilian President Dilma Rousseff, her predecessor Luiz Inacio Lula Da Silva and Paraguay’s Fernando Lugo.

“I’m just sharing my thoughts, but it’s very, very, very strange,” he said. “Evo take care of yourself, Correa, be careful, we just don’t know,” he said, referring to Evo Morales and Rafael Correa, the leaders of Bolivia and Ecuador.

“Fidel (Castro) always tells me, ‘Chavez be careful, they’ve developed technology, be careful with what you eat, they could stick you with a small needle, In any case, I’m not accusing anyone, I’m just using my freedoms to reflect and issue comments on very strange events that are hard to explain,” he said.

If you say education is expensive, try ignorance. (gistexpress)