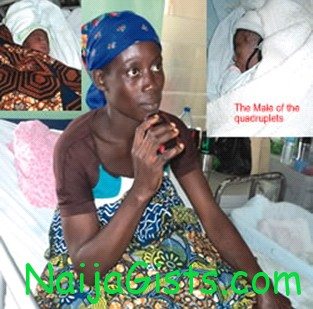 Iyabo Oladunni, a 35-year old mother of five girls who delivered a set of quindruplets at UCH (University Teaching Hospital) in Ibadan is currently in awe and shock as her husband has disappeared after her miraculous delivery of five babies. naijagists.com

Iyabo Olayemi Oladunni is a tailor while her husband works as a welder.

The blessed mother of five beautiful girls said her aim & hope is to deliver a boy through this pregnancy but to her surprise, God gave her more than she requested for.

Moreover, Iyabo Oladunni said that the eldest of the first five girls, who is now 12 years old, lives with her father’s younger brother at Lagos. The second girl, 8-year-old, is presently in Nursery 3 in a school in Ijaye; the third born, a set of twins, are in Nursery 1 and the fifth girl, aged three years has not started schooling.

When asked how she feels about the birth of the babies, Iyabo said “I have mixed feelings about their deliveries. I’m partly happy and partly sad. I’m happy because I have a male which is my desire among the four children, and sad because I don’t have the wherewithal to take care of them in a rented room where we live.”

According to Iyabo, although the couple were both desirous to have a male child, it was amazing that her husband and the father of the quadruplets, Olayemi, took to his heels immediately he had an inkling a day to his wife’s delivery.

Recounting her husband’s reaction when he heard she was carrying four babies in her womb, Iyabo said “after a scan was carried out in the month of March this year, and it showed there were four babies in my womb, I was afraid and started crying.

‘”But the doctor who did the ultrasound test encouraged me to pray to God for assistance instead of weeping. The man also told me that God, who put them there, will definitely take care of them. When I got home after the scan, I told my husband about it and he kept asking me ‘where do I take the four babies to?’”

She, however, pleaded with her husband wherever he is that he should return home so that they can jointly take care of the babies, even as she called on the Oyo State governor, Senator Abiola Ajimobi, to come to the aid of the babies in whatever ways he deems fit. She also appealed to Nigerians generally to come to her rescue.

According to the pastor of the Oladunnis, Evangelist Olawumi Abiola of Emmanuel Anglican Church, Ijaye Orile, Akinyele Local Government, Ibadan, “Mrs. Iyabo Oladunni started complaining of stomach pain for a very long time and had used some medications. When she told me that the pain persisted, I persuaded her to undergo a medical test in order to get to the root of the stomach pain.

After the test, she discovered that it was pregnancy and I told her that she should go and register in a hospital outside Ijaye. She obeyed and came to register at Adeoyo State Hospital. I can’t afford to lose her as I lost another member of the church about two years ago.”

Evangelist Abiola also spoke about the commitment of the Oladunnis, especially the wife owing to the fact that women are generally committed to the work of God. He also expressed his gratitude to God for keeping the four babies and their mothers alive. “I implore Nigerians to come to our aid, most especially considering the future of these children. The responsibility cannot be carried by an individual more so that the parents live in a village; there is no money in the village.”

Also speaking, the mother-in-law, Madam Moyiola Oladunni, said, “I’m very happy for this miraculous work of God. When God gives me this blessing, I can’t question him, but my major concern is how to take care of these blessings because it’s not a one-man responsibility.”(olufamous)

While others are looking unto God for just a child, some people are running away for having more than one.

This world sha! Fingers are not equal o.