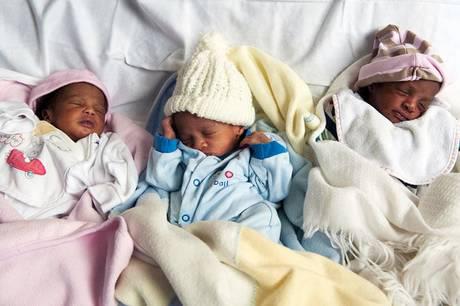 Feb 8, 2014 – Man Ran Away From Hospital On Hearing His Wife Is Having Triplets In Ekiti State Nigeria

Mr Adewale Omole, a bricklayer by profession has disappeared from a hospital on hearing his wife, a mother of two is set to deliver a set of triplets.

Mr Omole did not even wait for the woman to give birth before picking race.

The woman, who already had two children, said her husband abandoned her and the babies. She said that her husband started behaving strange after she went for a scan in Lagos where she was told that she was expecting triplets.

The babies were delivered at the Ekiti State University Teaching Hospital (EKSUTH).

“My husband abandoned me even before I gave birth and he has refused to perform his responsibility as father. He left me without food. That is why I had to relocate to this spiritual home where I have received spiritual succour and financial assistance. Since the sudden disappearance of my husband, life has not been the same again, as I, the two children and the newly born triplets are finding it difficult to survive. I am begging him to come back for the sake of these innocent babies,” she pleaded.

Abosede appealed to Governor Kayode Fayemi of Ekiti and well meaning Nigerians to come to her aid.

Confirming the story, the Matron in-charge of the maternity at EKSUTH, Mrs Adenike Oluyide, called on well wishers to assist Abosede, as the triplets are currently at the Special Baby Care Unit of the hospital.

The church member, who pleaded anonymity, said the leadership of the congregation felt she could benefit from the free medical programme of Ekiti State Government for women and children.