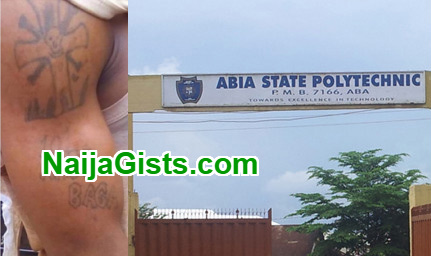 Samuel Effiong, a 25-year-old final year Public Administration student of Abia State Polytechnic, Aba,  on Monday told journalists that he was a cult member and not an armed robber.

Effiong, who hails from Akwa Ibom State, was among the suspects paraded by the Abia State Police Commissioner, Mr. Leye Oyebade.

The commissioner said Effiong was arrested for robbery. But the suspect said he was a member of the Supreme Viking fraternity and was arrested after a revenge mission on a rival cult group, the Black Axe.

According to him, members of the Black Axe had attacked a member of his group, robbed him of his phone, money and inflicted machete cuts on him.

He said: “We had a problem with another cult group who attacked one of our members and collected his phone. He reported the matter to us and we decided to intervene immediately.

While going to meet them, we saw some members of Black Axe group. We asked them why they attacked our member. We also asked them to return the phone but they refused to give us the phone.

Then, we started fighting. “I was sleeping in my house when the police came and arrested me. The guns (which the police recovered) are not mine; I don’t know how they got the guns.

They searched the premises where I was living and got a gun and said it is mine. I have sold the phones we collected from them Black Axe members.” His accomplice, Obioma Ubani, said he was a member of the cult group but not a student.

Ubani said he was selling Okirika (secondhand clothes) at Ngwa Road Market, Aba. According to him, he embraced cultism because he needed a relationship having lost his parents years ago.

“I needed protection and relationship because I don’t have anybody. My parents are late. I am from Obingwa Local Government.” Oyebade said Effiong was arrested in an uncompleted building at Umuwaya Ohuru Isimiri, Aba.