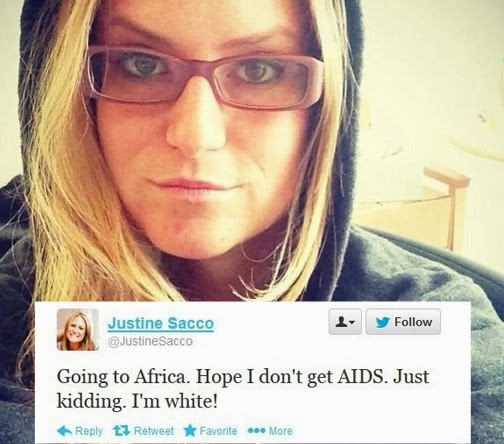 Ryan Trostle, the spokesperson for IAC who confirmed Justine Sacco’s sack said the company has zero tolerance for racial abuse.

“The offensive comment does not reflect the views and values of IAC. We take this issue very seriously, and we have parted ways with the employee in question.”

“There is no excuse for the hateful statements that have been made and we condemn them unequivocally,”. “We hope, however, that time and action, and the forgiving human spirit, will not result in the wholesale condemnation of an individual who we have otherwise known to be a decent person at core.” – Ryan said

Fellow co-workers have tagged Justine a dumb woman for making the offensive remark in the public.

Justine Sacco is out of job and guess what, her trip to Africa has been cancelled.