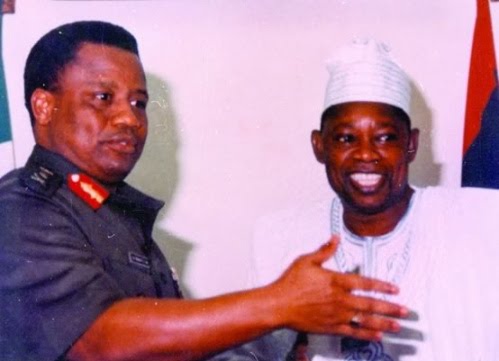 For the first time in history, former Military President of Nigeria, General Ibrahim Babangida, IBB has revealed that he gave now late Chief MKO Abiola N35 million to contest for Presidential election in 1993.

Gen Ibrahim Badamasi Babangida, is going beyond the first layer of the mystery of what is today referred as “June 12.” The retired army general was the military president at the time and he had managed that political process. Chief Moshood Kashimawo Olawale Abiola (MKO) was widely believed to have won the election, but Babangida annulled it before the umpire, the National Electoral Commission (NEC), announced the final result. The consequences of that act were dire and the rebounds ugly. Even today, those consequences are still gnawing at the delicate aspects of the country.

Twenty years on, full and authentic story of that period has eluded Nigerians and it is so because, those who are in the know have maintained sealed lips. Well, until now. A book, Ibrahim Babangida: The Military, Politics and Power in Nigeria, written by one of the founding members of Newswatch magazine, Dan Agbese, may have given us a serious glimpse into those dark, troubling days. One of the most striking, if surprising, is that, against all expectations and imaginations, IBB, the man who annulled the election, had actually encouraged Abiola in every way possible to run. In an interview with IBB, published in the book, the former military president said he supported Abiola “a lot, morally and financially in the campaign.” He said he gave Abiola N35 million to help in the election.

According to him, before Abiola entered the race, he and Babangida “talked of the pros and cons” of Abiola’s presidential ambition. And when Abiola “eventually decided that he wanted to go (for it), I supported the idea that he should do it.”

According to Babangida, he had wanted to make Abiola the chairman of the Transitional Council because he believed his friend “enjoyed tremendous political goodwill. His name was a household name. He had the international contact and Nigeria too had a very good chance of having someone like him heading that organisation.”

However, according to the book, this proposition was dead on arrival as some of Babangida’s colleagues in the ruling council opposed it. Instead, they agreed to accept him as a member of the council but not the chairman.

Babangida, according to the book, told Abiola he would bring him in as a member and ensure that the members of the Transitional Council elect him chairman.

The book further reveals that the Armed Forces Ruling Council (AFRC) had decided that the chairman of the Transitional Council should come from the South West where Abiola came from. But Abiola rather wanted Babangida to announce him as chairman “straight away.” He told Babangida that, that was how his family wanted it because they feared that the president might change his mind once he made him just a member. “Left to me,” says Babangida, “I wanted to make him the chairman. Then he decided and blew it.”

The emergence of the two presidential candidates was equally dramatic. It followed the disqualification of 23 presidential aspirants. According to the book, IBB had regarded the 23 disqualified from participating in the presidential election, as the first 11 among the politicians jostling for power. Their ban thus paved the way for the emergence of new political actors on the stage of the transition programme.

“With the first 11 put out in the cold, there were few runners in the field. Two men easily emerged from the thin crowd of presidential aspirants. One was the billionaire philanthropist, Bashorun M.K.O Abiola, who nursed a presidential ambition going back all the way to the major financiers of the National Party of Nigeria (NPN).

“He intended to contest the presidential election on the platform of the party in 1983. The party moguls erected obstacle in the way. He quit the party and partisan politics altogether in 1982. He was affected by the ban on former politicians and public office holders and unsuccessfully challenged his ban at the tribunal. With the ban lifted, he joined SDP in January 1993 and was elected the party’s presidential flag bearer at its convention in Jos in March that year.

The other man was Alhaji Bashir Tofa, who, like Abiola, was a national executive member of NPN. He was the party’s national financial secretary. He picked the presidential ticket of the NRC at its convention at Port Harcourt in March 1993.

Both men were Babangida’s close friends.”

Babangida was not quite comfortable with this. He says he feared people would accuse him of manipulating the transition programme to favour his close friends. He even tried to discourage Tofa from contesting the election

“I told him (Tofa) in the presence of about 13 of his colleagues. I advised him not to seek for that election. I didn’t support him. He was not a winning candidate.”

According to the book, even as the chairman of National Electoral Commission, Professor Humphrey Nwosu, had seen the conduct of the presidential election as critical to the entire transition programme and was on ground to see that it ended on a sound note. But the cloud was gathering, as the “National Defence and Security Council did not openly object to the two presidential candidates – Abiola and Tofa – but some elements in the military in cahoots with some of the politicians wanted to stop them from contesting the election.

“Several times the council, pressurised by these elements, came close to disqualifying the two men. Some members of the council felt that neither Abiola nor Tofa was fit to be president. They assailed Abiola’s character. Babangida recalls that “they never saw him as somebody who was morally upright or fit…”

“They tried to blackmail him as a government contractor to whom the government owed a lot of money and they didn’t feel comfortable that this would be their commander – in – chief.”

The book notes how providence smiled on the two presidential candidates and, according to Babangida, the council feared that “ if we stopped it (the election), we would be in trouble again. What was paramount in our mind then was we wouldn’t like to be accused again of not wanting to leave office. So, we said let the bloody thing go on.”

The decision to “let the bloody thing go on,” was actually a fluke. The military, according to Babangida, believed “that we would have an inconclusive election. We thought we should be fair to let it run and when it became inconclusive, then we would take whatever action that we deemed necessary over a re-run or a re-election or something like that.”

The military, the book says, underrated Abiola’s clout, as his followership unsettled those elements in the military that did not like him. “About a week or so before the June 12, 1993, presidential election, security reports indicated that Abiola would certainly trounce Tofa beyond dispute. He would win on the first ballot. The election would not be inconclusive. The report caused some jitters in military circle. What to do?”

The cabal in the military that didn’t want Abiola, was saddled with what line of action to take next.

According to the book, at this stage of confusion in the military hierarchy, former Second Republic senator, Francis Nzeribe, came up with the military-should-stay campaign, which served as tonic for the government. He formed the Association for Better Nigeria (ABN), with Abimbola Davies as his second in command.

“Nzeribe went to Abuja high court on June 10 to stop the presidential election for alleged irregularities and corruption in the conduct of the SDP primaries won by Abiola. ABN alleged that Abiola used money to induce the majority of the delegates to vote for him.

“At 9.30pm on the same day, the court, presided over by justice Bassey Ita Ikpeme, now deceased, threw the spanner into the works. She “restrained (NEC) from conducting the presidential election on the June 12, 1993.”

Her judgment was the first major indication that the transition programme was under serious threat. “Nwosu tried to salvage it. He appeared before the NDSC on June 11 and put a strong argument in favour of going ahead with the election. He argued, quite passionately, that if the election was postponed, the election materials already on site would be compromised.

“NEC had enough protection under the decree to ignore Ikpeme’s ruling. But the Attorney General and Minister of Justice, Clement Akpamgbo, had a different take on the issue. He did not support Nwosu’s position. Instead, he advised that the election be postponed in obedience to the order, NEC could then appeal and have the order set aside by a superior court.