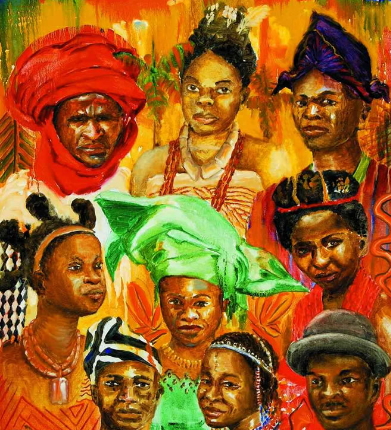 About 400 distinct languages in Nigeria have been identified by linguists. Almost three quarters of these languages are found on the Jos Plateau, Southern Zaria of Kaduna State, Bauchi and Adamawa hills and upper Benue River Valley as well as the Cross River valley and Middle Niger River valley.

Apart from these minorities who together constitute substantial component of Nigeria are the so-called majority groups like the Igbo, Hausa, and Yoruba. This group were regarded as the tripodal foundation on which the Nigerian house stood. The federal architectural design for the Nigerian house was built on the fact of this triune nature of Nigeria.

For a long time this was the accepted reality until the so-called minorities in the three regions even before the exit of the British began to agitate for their own home rule or for special institutions to be created to facilitate their quick economic and educational development.

The Action Group of Chief Obafemi Awolowo was the first to recognize the potency of this ethnic force by embracing the creation of states as the party’s strategy of winning power at the centre. Chief Awolowo recognized that the only way he could come to power was through a coalition of the various minority groups presumably under the leadership of his largely Yoruba party. The constitutional angle to this strategy was fiscal federalism, meaning a loose federation in which each federating unit managed its financial resources but contributing enough to the centre to run common services like defence, aviation, communication, transportation and currency and no more.

The other two main parties, the NCNC (National Council of Nigerian Citizens) led by Dr Nnamdi Azikiwe and the NPC (Northern People’s Congress) led by Alhaji Ahmadu Bello were opposed to creation of states for their own strategic reasons. Ahmadu Bello did not want the North, his base of power split. Azikiwe for the same reason wanted the East to remain undivided.

He also was opposed to the federal structure of government preferring a unitary constitution as a way of overcoming ethnic divisions in Nigeria. Even though Awolowo and Ahmadu Bello were ideological enemies, they however were staunch supporters of fiscal federalism.

Federalism was of course more realistic and Awolowo and Ahmadu Bello wanted control of the agricultural wealth of their regions whereas Azikiwe who led the agriculturally poor Eastern Region wanted Unitarian structure so that the East could benefit from a collective pool of the national wealth.

This was the political setting that took us to independence in 1960. The story of how the northern and the eastern political forces combined to finish off Awolowo and to send him to jail exploiting the division in the Action Group is well known.

During the Action Group crisis and the weakening of the Western Region, the Mid-west Region was created in 1963 from the West while unlike what Awolowo advocated which was, contemporaneous creation of state’s in the three regions, the remaining regions remained intact.

The civil war gave Awolowo opportunity to see the creation of states as part of the strategy of winning the civil war and perhaps to realize his long held view on state creation. Thus the 12 states structure under Yakubu Gowon gave the minorities in the Eastern Region and in the North something to fight and to die for. Unfortunately, instead of keeping this 12 states structure, each succeeding military ruler has further divided the country into small and unviable states arbitrarily and without rhyme or reason and sometimes to satisfy the desires of those in power.

We now have 774 local government areas and 36 states not counting Abuja which is a state but not in name. The result of this is that almost 80 percent of national resources are used in administrative costs of payment of salaries and allowances and humongous payment of federal legislators. There is no money left to maintain nationwide infrastructure of roads, rail, and other infrastructure such as ports, air ports and other means of communication and aviation.

Money so spent on administration would have provided jobs for our teeming population of youths who have now been mobilized into ethnic armies and movements by charlatans looking for what to eat. School dropouts are issuing statements on behalf of nations like the Yoruba, Igbo and Hausa while responsible people for fear for their lives are keeping quiet.

There is nothing wrong in being patriotic and embracing one’s ethnicity but not to the extent of hating and denigrating fellow countrymen and women. It is my considered opinion that it is the dwindling opportunities for employment that is fuelling the ethnic fissiparous tendencies in the country. It is idle hands that the devil finds work for.

It is the frustration that nothing is working and nobody is trying to find solutions to pressing problems that is making people to go back to their ethnic comfort zones. The question is where are the Nigerians and how do we build a country we can all call our own? Karl Marx is right when he said economics is at the basis of all relationship.

You are a good father when you can provide for your family. A country is worth dying for when that country can provide for you and for your descendants. We all want to live and provide for ourselves in a country which has a future for our families. In the absence of this, we look for alternatives. The lack of opportunities and the level of poverty in the land is driving us to the edge of the precipice.

The entire Benue valley was influenced by the Jukun. Sometimes Jukun influence spread to the Hausa states. Hausa land looked eastwards to the Kanuri for enlightenment. In other words there were chains connecting all our people in the distant past before the advent of British colonialism. We may be speaking different languages today but most of the languages spoken in Nigeria belong to the Kwa group of the Niger-Congo family of languages.

The material culture of the Nigerian area as seen in the Nok, Ife, Ugbo Ukwu, Benin, Idah, and Bida leaves no doubt about the cultural sameness and uniformity of the Nigerian area before the advent of the British. The concentration of unique African culture of dance, song, cuisine, couture and civilizations in the area at the central Atlantic and at the trigger of the African continent imposes some kind of mission on this area in the leadership of the African people.

If all this is true, why then do we have the problems of forging a nation out of the multitude of tongues it has pleased the Almighty to endow us with?

What we need to do is re-engineering of the country to make it workable. The centre is too strong. We must devolve power to the regions whatever the number of them we collectively agree to have. We must free the resources of this country from over-administration and channel them to physical development and industrialization so as to create jobs for our people.

We must embrace the principle and practice of fiscal and cooperative federalism. If people have jobs and they can fully realize their potentialities, it will not matter to them who is president or prime minister. In any case, the arena of politics should be shifted to the regions while the centre will simply manage affairs collectively assigned to it.

We spend too much time on politics and little time for development. It is not so in serious countries like Japan, Germany and Canada to mention a few.

Whatever we finally agree to do in this country, we must realize that the forces and facts of history and geography have made it impossible for us to separate.

We cannot change our neighbours so it is futile to be talking about separation.

If we are not happy about our current political structure, we must agree to reconfigure it and this must not be done by threats and blackmail. We are and remain Nigerians.