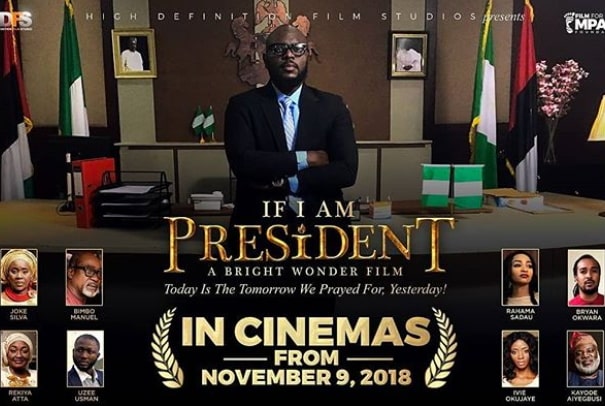 A new film that seeks to change the unpleasant narrative about Nigeria’s political landscape, ‘If I am President’, has premiered in Abuja amid pomp and pageantry.
The film, set in the present-day political terrain and discourses in Nigeria, tells the story of 37-year old Zinachi Ohams, the presidential candidate of the Nigerian Rebirth Party, a new party made up of young idealists who recently made a shift from social activism to full-time politics.

Armed with little more than their utopian values; the young idealists waded through challenges of several politically-motivated attacks and nasty maneuverings by the ‘old dogs’ of Nigerian politics, to emerge as the party and candidate to beat in the country’s coming presidential election.

Speaking to journalist at the premiere, Bright Obasi, the producer and director of the film, said ‘If I am President’ aims to rekindle hope for Nigeria in the hearts of the people.

“The movie aims to say one thing: ‘there is hope for this nation’. The greatest challenge we have as a people is the mindset that it cannot be done. But we want to say to Nigerians that the ‘If I am President’ was made not just to entertain but to spark a fire that will inspire them to get involved in politics and do something great for this nation to make it better,” he said

‘If I Am President’ was produced by High Definition Film Studio with support from MacArthur Foundation.

Continue Reading
You may also like...
Related Topics:if am president, movie, nollywood