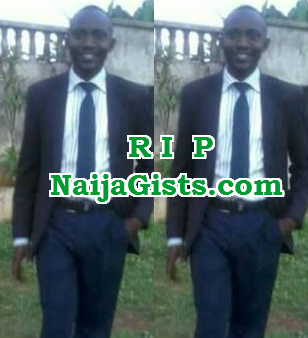 The family of late Dr J.B Ogunseye may have had pre­monition of the death of the Senior Dental Officer of the General Hospital, Ifaki Ekiti, according to his elder brother, Mr. Olumuyiwa Ogunseye.

Speaking about the death of his brother, Mr. Olumuy­iwa said:

“I never knew his death was imminent. But on Sunday, he came to me in my dream, talked to me on the need to straighten up things in the family and apologized on behalf of my dad. I woke up and said, ‘What is hap­pening?’ Again, on Sunday through Monday, he went to my mum and preached the same message of reconcili­ation and the need to live in peace within the family.

Later on Monday, one of his pri­mary school friends came to me and asked me when last I heard from my brother. That was when it occurred to me that something had happened. He left behind two aged par­ents. He was an alumnus of the University of Ibadan.”

The late Ogunseye, according to the Chairman of National Association of Government General Hospital Medical Dental Practitioners (NAGGMDP), Dr. Folu Ekundare, nursed the ambition of becoming the next NMA chairman. He was said to have disclosed his intention to contest the position to one of his colleagues, Dr Ekundare, at one of the association’s assignments in Akwa Ibom State in March. Ekundare who claimed to have met the late Ogunseye 15 years ago spoke about his last encoun­ter with the deceased.

“I had known Dr Ogunseye as far back as 15years ago. We met at an NMA meeting and I saw a vibrant, eloquent and courageous man. At the end of the meeting, we introduced ourselves to each other and we became friends from then. Eventually, I became the chairman of our association, NAGGMDP, and he became the secretary.

Just last month, he called and asked me if I was aware he was contesting the NMA chairmanship position and I told him I was aware. We discussed a lot because we slept on the same bed in the hotel room,” he disclosed.