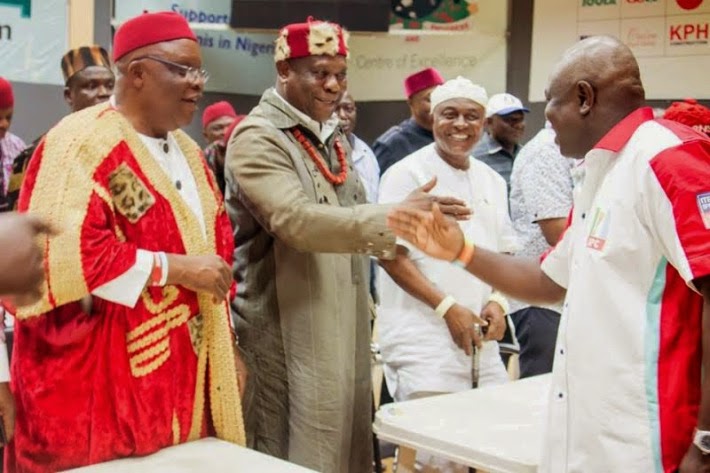 Read Mr Atueyi’s account of what happened on the day;

“All the Eze Ndi Igbo honorary in Lagos went to pay HRM solidarity visit on Sunday and I was fortunate to be among those present at the said meeting. What the Oba said was fully and simply directed to only the Igbos present at the meeting who his majesty considers to be very close to him and should understand him well enough.”

“You know when one talks to his very close friends and subjects, he tends to be very free with them, so he was being very free with those present at the meeting and wanted us to realize how serious and close he takes us and our votes, because he cannot imagine us giving him our words only to turn back and do the very opposite.”

“He did not force us to the meeting, we were the ones that went to him on solidarity visit, so it would be very evil of us to only go and deceive him there. He only jokingly (at least as it appeared to me then) warned the people present at the meeting who he considers his own people.
The said warning that we are supposed to be very conversant with since we have all the “Ëze Ndi Igbo” present there, as that was not the first time we visited him. We are all already aware of the Yoruba culture and understood perfectly what he meant. There was no specific place he referred to all the Igbos in Lagos.”

“He was only addressing the Igbos with him present there whom he considers his own people and he simply observed his culture which we all quite understood and this explains why there was applause and laughter at the end of his speech. We were expected to, thereafter, talk to our people in civilized manner to convince them and canvass for their votes if we truly believe we are capable of doing so.”

“The tradition of lagoon water threat was directed only to those present at the meeting as culture demands. Though he appeared serious but we all understood it as a joke, that was why we all applauded him and made fun of it there.”

“So I suspect serious politics at play here. I wouldn’t know who recorded the speech and decided to play politics with it. It is most unfair to his majesty to be portrayed in this manner and I think I owe it as a duty to speak up before things get out of hand.”