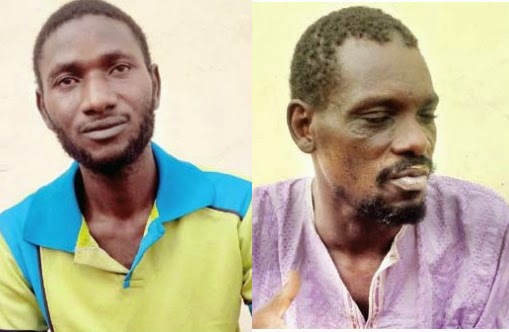 A 26-year-old suspect from Kebbi State, Usman Shehu Mohammed has confessed to the police, how he conspired with one Moham­med who is currently at large to slaughter their employer, an Indian national over an unpaid salary.

The suspects were security men at Trans African Farms and Food Ltd, Eleko, Ajah area of Lagos State, a company owned by an Indian. They broke into the office of Srivas­tava Shailesh Kumar, the operation manager of the company at about 3.30am with the intent to collect their unpaid salary through robbery. On realising that the man would not yield easily, they sliced his throat, stabbed him severally before carting away valuables.

At the brink of death, Kumar was able to make a distress call to their director before he became unconscious. He was rushed to the General Hospital, Akodo and later trans­ferred to St Nicholas hospital, Lagos Island where he was confirmed dead.

Aware of who Kumar’s attackers were, Adamu Umaru and one Ali who were sure­ties to the suspects were arrested and handed over to the operatives of Special Anti Rob­bery Squad(SARS), at the state police com­mand, Ikeja.

Detectives led by the officer in charge of SARS, SP Abba Kyari tracked down Usman in a farm at Argungu, Kebbi State where he was hiding.

In his confession to the police, Usman al­leged that it was Adamu that advised them to commit the crime when their employer failed to pay them their January salary.

Ready to bare it all, Usman said that his greatest regret was travelling down to Lagos in search of greener pastures. “I used to be a farmer in Kebbi State till I realised that most of my friends who travelled down to Lagos were better than me. They were richer and looking fresh. Farming takes a lot of energy especially if you do not have money to marry many wives or hire labourers. Above all, it is a seasonal thing. I was fed up with such life and decided that it was time I move down to Lagos.

“In November 2014, I came down and stayed with my brothers from Adamawa. They were the ones who introduced me to the Indian company as a security man. We were employed through the CSO (Chief Se­curity Officer) as a contract staff and would be paid N17, 000 at the end of the month. We were employed mid-December and he paid us money for the remaining days in Decem­ber to help us feed.

“We managed ourselves till the end of the month and the CSO started giving us one reason or the other why he will not pay our salary. Life was tough and we could hardly feed,” Usman said.

However, they sought the help of Adamu who they claim was their supervisor. “We complained bitterly to Adamu, one of our su­pervisors and he told us to be patient. On the February 11, 2015, he volunteered to call the CSO in our presence. He actually called him and the man said that he has a problem with the police and that he will surely pay us. We were very bitter and Adamu told us that we need to go and threaten the Indians so that the money will come out by force. He was the one who told us that they might not pay the money so the best thing would be to collect it by any possible means,” Usman alleged.

He claimed that Adamu was the one who gave them the weapon and performed a brief ritual to ensure that the operation will be smooth. “Adamu has a lot of juju that he uses to control people, especially the CSO, that is why he does two jobs at a time and no one complains. He specifically advised us to shake him very well if we wanted that mon­ey. I never knew that Mohammed was with a knife, I thought he was only going to scare the man. We jumped into his office through the window at about 3.30am when he was fast asleep. The noise woke him up and he wanted to shout, but Mohammed rushed him and used the machete to slice his through. He screamed for his help and Mohammed stabbed him severally to silence him. I was terrified but what would I have done to save the situation? We ransacked the whole house and left with his brief case and other valu­ables.

“He opened the brief case and gave me N10, 000, that this is my share of the loot. I was angry and he said that he will hand over the rest to Adamu. I knew that my own has finished in Lagos, so I ran away and joined the next truck going to Kebbi,” Usman said.

Pleading for mercy, Usman said he would go into full-time farming if given another chance to live. “My greatest mistake was leaving a honour­able work that I was doing to travel down to La­gos. I am sorry that he had to die. It was not my plan to kill him, it was Mohammed who decided to slaughter him. I only wanted my salary, since the CSO was not ready to pay us. We wanted it to look like a robbery but Mohammed was so des­perate.”

On the whereabouts of Mohammed, he in­sists that he does not know. “I am not surprised that the police cannot find him because Adamu gave him a charm that will protect him. I am also shocked that Adamu is seriously denying that he was not the one who asked us to go and rob the Indian man.”

Meanwhile, Adamu Umaru, who claims to be a supervisor in the company, insists that he was not the one who advised them to rob or kill their Indian boss. “I am a supervisor in the company and for anyone to rise to that position that means that he is trustworthy. The CSO called me that they needed extra hands. I called Ali, my friend who introduced Usman and another Umar to me. I knew Mohammed, so I decided to bring him into the company. I was doing two jobs at a time. Since my boys are on ground, I would leave them to manage the security in the compound while I go to do another security job. At the end of the month, the CSO explained that he was having financial problem and cannot pay the salary yet. He pleaded that he should be given time. I explained to them but they were very angry.

“On February 11, 2015, both of them came hungry and angry. I called the CSO who also pleaded again that he would pay them soon. These boys were angry, so I do not know what else to tell them. I simply advised them to go and meet the Indian man and report the CSO to him. I never advised them to rob or kill the man.

“I was surprised when the CSO called me at 4am the next day that robbers were in the compound. I rushed down and discov­ered what really happened. I was arrested, since I am the one who recommended them. The CSO said that the Indian man was able to tell them who and who attacked him be­fore he died.”

On the whereabouts of Mohammed, he insisted he does not know his whereabouts or heard from him. “I do not know where he is. All I know is that he is from my village, Borno State. He never contacted me after the incident. I only asked them to politely tell the Indian man that the CSO is owing them. I was afraid that since the CSO said that he was having problem with the police, that he might not pay that money,” Adamu narrated.

Confirming their arrest, the state police spokesman, DSP Kenneth Nwosu, said that detectives are still on the trail of Moham­med and will surely fish him out to face the wrath of the law. He, however, wanted em­ployers to do proper background check of their employees.