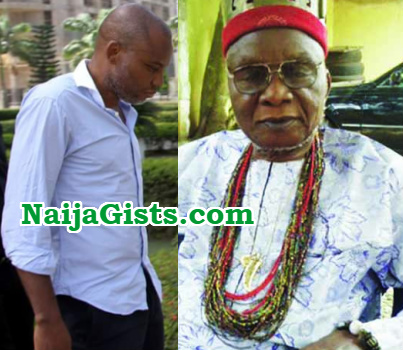 How do you feel about your son’s incarceration?

Do you support IPOB approach to the Biafran agitation?

Against what some people are saying that my son’s approach to the agitation was wrong, did not in any way offend the laws of the land in the real sense of the word. What he is saying is what ought to be done. He has not carried any gun or knife. He was just saying the truth which government ought to have looked into instead of applying force and clamping down on the agitators. Dialogue should be the best way out. The whole world knows that what my son has been saying is the truth.

Are you considering initiating truce between your son and the Federal Government?

As you see me, I am widely known as Omeudo (meaning peacemaker) and it is conspicuously written on the signboard outside my palace. In as much as I want peace and believe in it, it is not for me to initiate any peace move between the Federal Government and my son. If the Federal Government wants peace, they should release my son who had done nothing wrong and we can then talk about other things. In effect, as things stand now, I am not in a position to initiate that peace move.

Initiating that peace move will mean telling Nnamdi to forget about, or renounce Biafra which I know he will not agree to, not when he is still in detention. My son has come of age and takes certain decisions himself, so, there is advice I wouldn’t even contemplate to give him.

The thing is that Nnamdi is much principled. If he believes in a cause, he does not go back. So, any truce should best be initiated by the Federal Government and we will know how it will go.

How do you see the peace moves initiated by Dr Orji Uzor Kalu and his visit to Nnamdi in prison?

When I heard that the former Governor of Abia State, Dr. Orji Uzor Kalu visited my son in prison in Abuja, I was happy. This projects him as someone who loves his people and development. He is a man of the people. The young man (Kalu) equally surprised me when he came to my palace during the Christmas and New Year break to see me.

We discussed so many things including moves he wants to make to get my son, Nnamdi released from prison and solicited my assistance in that direction. I told him that Nnamdi is strong-willed; that he would rather die in what he believes in. But all the same, he could go ahead and discuss with the Federal Government as my son will not have much to say while still in detention.

Orji Uzor kalu I know is a man of the people as I said earlier and he is a go-getter; whatever he’s set to do, that he achieves. Having said that, if there is anything he knows he can do to get Nnamdi released from detention, I will support him. Mine is that my son should be released first and other things can follow, because he cannot be discussing from inside the prison.

Apart from Kalu visiting me here in my palace, some white men had also visited and the first questions they always asked was whether I am the father of Nnamdi and I would tell them yes. They would also ask me my mind about the agitation my son is spearheading and I would tell them there was nothing wrong with that. Some of them, after explaining things would understand where we are coming from.

Do you perceive Igbo political leaders are not doing much to get Nnamdi out of detention?

I am surprised that apart from Orji Uzor Kalu, no other Igbo political leader has visited Nnamdi in prison and nobody is talking. I wouldn’t know if this could be attributed to fear. Some months ago, you heard of what happened at Aba where some people holding rally were shot dead and nobody said anything and this is not good. Even in their own reasoning, Nnamdi had not done the wrong thing, that shouldn’t have stopped them from visiting him and showing him brotherly love as Kalu did. Igbo leaders have not indeed shown commitment to the Biafra struggle. I do not know the reason for their action except that they are afraid of their investment outside Igboland, which they will not carry to their graves when they die.

I am also worried to an extent that the Abia State government is also feeling indifferent about Nnamdi’s problem. As an Abian, one would have thought that the state government would have come out openly to say something, not to talk of visiting him in prison, but these things are not forth coming.

How do you quantify the losses so far incurred by the family over the Biafra struggle?

Well, I will not count the losses by my family without first counting the losses incurred by Ndigbo in the struggle. As you are aware, many people outside my family have lost their lives in the cause of the struggle, including of course, my relations. Since the agitation, particularly from the time my son was incarcerated, my family has lost a lot in terms of naira and kobo, which space will not permit me to detail. What you see in this compound was put in place before the problem started and since then, there is no addition. Nnamdi on his part has also incurred many losses because for over one year, he has been in detention, his businesses have suffered tremendously.

How was your recent trip to Germany?

Last year, I went to Germany, not for Biafra as some people were saying, but for medical treatment because I felt so bad then. Funny enough, while in Germany for four months, nothing was found to be wrong with me, yet I was dying. My health had not so deteriorated like that since my son was incarcerated.

How do you assess your son’s ongoing trial in the court?

It is wrong and the family does not see the rationale behind the court granting Federal Government’s request that their witnesses should wear mask. It shows that there is something these people are trying to hide in my son’s case. We’ve protested this through Nnamdi’s lawyers and we are still protesting.

It surprises me that it is the same Nnamdi who was arrested earlier and after interrogation by security agents and I was asked to take him home that is being tried by masked men as so called witnesses. It was during this period we knew that it was Chief Ralph Uwazuruike who was instrumental to my son’s problem because during the time in question, he sent thugs that attacked Nnamdi when he went for the traditional marriage ceremony of his wife.

Your word for President Buhari on this matter?

My word for President Muhammadu Buhari is that he should release my son because in Nigeria and indeed the world over, we have freedom of speech and Nnamdi has not done anything to deserve being incarcerated for this long. I am saying this because you cannot be talking about peace in the country while Nnamdi is languishing in detention.

Any intervention from the British Government so far?

We had expected the British Government to have intervened in my son’s case. This expectation emanated from the fact that Nnamdi is a British citizen who had committed no offence. If the Federal Government has been begging Boko Haram members and the Niger Delta militants to lay down their arms for dialogue and even granted some of them amnesty; why should they treat my son’s case different and Britain does not see that something is wrong somewhere? It behoves on them to know that Nnamdi did not commit any crime against Nigeria and they owe him a duty as their citizen to ensure he is released from this unjust incarceration.