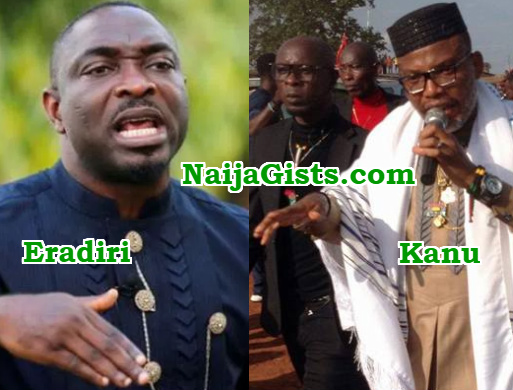 Here is what he said in Yenagoa Bayelsa today;

“Instead the government took steps that made Kanu popular among the masses, especially the youths, in the Southeast, who shared his belief and pledged allegiance to him,” he said.

“The truth is that the Arewa youths did their own threat to the existence of this country and nothing was done amidst all the calls for the arrest of those people, who threatened others living in other parts of the country under the nose of the government.

“Nobody said anything. The international community, everybody screamed and nothing was done. Now the federal government is pushing for the re-arrest of Kanu. Can’t you see the mobilisation that Nnamdi Kanu has done in the recent time?

“Any attempt to arrest him will be resisted because the government seems to be religiously biased. Asari Dokubo sometimes ago didn’t do as much as what the Arewa youths did before he was arrested.

“OPC leader and Uwazurike were all arrested for similar offences that were not as grave as what the Arewa youths did. So, if you did not arrest Arewa youths and you are calling for Kanu’s arrest, you are going to cause problem in the country.

“Kanu has a right under the United Nation’s Charter to demand for self-determination. Who was Kanu before the government arrested him? It is the government that mishandled the entire thing and made a hero out of him. Any further mismanagement of this process could lead to a different ball game.”