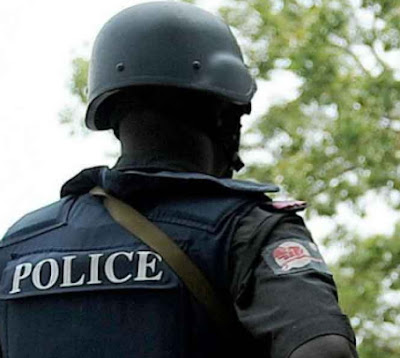 July 1st, 2017 – Chaos As Police Inspector Attached To Mopol 20 Ikeja Lagos Shoot Self In The Leg After He Was Barred From Seeing CP

About 24 hours after he met with elders of his church for prayers against some evil forces, a police Inspector, simply identified as Magaji has gone mad in Lagos.

Security sources informed Thecaveat that Magaji is a chief clerk attached to police Mopol 20 in Ikeja Lagos. Magaji was reported to have stormed the premises of Police Cooperative office near Lagos State University Teaching Hospital (LASUTH), Ikeja, Lagos in mufti.

Thecavaet was informed that the inspector went berserk as a Provost Inspector manning the entry gate demanded for his identity because he was in multi.

According to our sources, Magaji who always clutched a Holy Bible to his chest danced round the gate entrance like an infuriated man in drama.

“Instead of showing his identification card as demanded, within seconds, Magaji pulled out a revolver pistol and threatened to kill the Cooperative Inspector, Mr Pius Oguche, a prince of Igalla in Kogi state.

However, the timely intervention of the Area Commander for Area ‘F’, Mrs Yetunde Longe, an Assistant Commissioner of Police, joined by his Ikeja Divisional Police Officer, DPO , did not initially helped matters, as Magaji threatened to eliminate everybody, including the two police chiefs.

Pretending to be yielding to his threat, the DPO strategized with two ranks and file who succeeded in dislodging Magaji, but Magaji had succeeded in firing his lap in attempt to fire the junior officers.

He was later overpowered and taken to the hospital where he is now receiving treatment.

Receiving treatment at LASUTH as an in- patient, Magaji, is said to have told policemen on visit to him that certain forces are after his life.

He was said to have complained to his church elders that certain centrifugal forces were fighting against his centripetal goals, that his lewd and weird conduct underscored his earlier “premotion”.

Couple Devastated As Twin Babies Born After 17 Years Of Childlessness Die In Fatal Car Crash
JJC: Funke Akindele Not Pregnant With Twins, My IG Post Was A Prophecy From Nathaniel Bassey