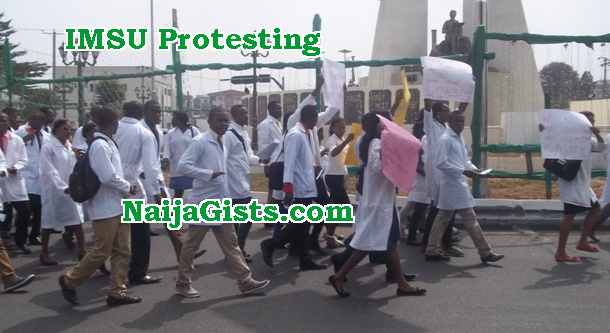 As others gain admission and joyfully go through their academic journey with the hope of becoming graduates as at when due in Imo state university, this is not same for students admitted into the
department of medicine and surgery in our state owned university as the medical students are left to wallow in frustration over their delayed stay in the university.

High school graduates who envisage becoming medical doctors in not more than six years from the year of
entry into the college of medicine, Imo state university end up in agony and frustration along the line. Medicine and surgery in Imo state university got accredited few years back after their first set of students had already spent fourteen years in the university against the normal six years duration meant for the course in Nigerian universities.

This late gaining of accreditation caused a heavy backlog which is yet to be rectified till this day as IMSU has
continued admitting against professional advice which stated that they do not admit for four to five years to enable them clear the backlog and stabilize the medical school in the university.

Currently, medicine and surgery in IMSU is being studied for ten years against the proposed six years duration and the students have always got false promises both by past medical students leaders and the management, college of medicine, that things are being put in place just to calm the nerves of the already frustrated students while in the actual sense, things tend to get worse every day.

In IMSU, the approved quota for medical students by medical and dental council of Nigeria is fifty
(50), this implies that IMSU medical school cannot graduate more than 50 students every year. Having in mind that we have an average of 80 students per class and ten classes in the medical school, it is almost
impossible to correct the plights of these students unless the bull is taken by the horn through increasing of quota or transferring of IMSU medical students to other universities with higher quota, to accommodate either seven or eight students from each professional examination class.

As I write, I have spent seven years in the journey towards becoming a doctor without having a re-sit in any of my courses talk more, a repeat year ,yet, I still have three whole years to pass through before becoming a doctor. Due to the number of students in each class exceeding the quota for each year, some people in their finals end up paying the price not because they should not have passed but because the medical school cannot graduate a number exceeding the quota, what an agony for those in this category.

The unstable schedule for conducting professional exams have equally contributed to the increased number of stay in the medical school as sometimes, exams are delayed for months or even a year. This implies that the study of medicine and surgery in IMO STATE UNIVERSITY runs through duration of ten years (or more for those who end up failing any of the professional exams and having a repeat year) and there is no serious move on ground to stabilize the duration of the study of medicine and surgery in IMSU.

Currently, we are being face with an accreditation exercise by the medical and dental council of Nigeria coming up any time soon which will either increase our number of stay to eleven years or more should
we lose the accreditation or stagnate our stay at the same ten years if our quota is not increased to at least one hundred (100) or above. Though it is almost impossible for a state university’s quota to skyrocket from fifty to hundred.

The ten years of stay against the normal six years have had many negative implications on the lives of medical students as it has brought about a delay in their plans for the future, brought about extra cost of housing, feeding and other daily expenses for an extra period of four years for a fault not theirs and brought sorrows coupled with financial stress upon their parents. This ten years being spent by innocent students has ended up frustrating the lives of these medical students as most of them feel trapped between the devil and the deep blue sea considering how far they have gone and so, decide to endure it with its pains, frustration and agony. This negative psychological trauma created on the mind of these students by their
condition have a lot of negative impact on them during their practice as they will always live in regrets of having spent extra four years which would have earned them another degree, given them opportunity to
further in their chosen career or even helped them in their clinical practice. It is best imagined than experienced, having a doctor from such an environment who has decided not to let go his regrets attend
to you. It is also demoralizing to say that our own state owned teaching hospital is now a shadow of itself due to lack of accessible road, improper funding and poor management.

This has equally added to the agony of these medical students who are expected to have the knowledge of diverse clinical cases which would aid them in the learning process. It is a pity to also state that patients on
admission at the teaching hospital are most times, asked to get to the international market orlu and purchase their drugs as they are not available in the pharmacy department of the hospital.

What a level of deterioration!
It is on record that Imo state university medical school has the best of lecturers, doctors and consultants as long as medical school in Nigeria is concerned, coupled with serious and studious medical students. It is verifiable, but their hands are seriously tied due to poor management of the medical college and the teaching hospital which is deteriorating every day.

Medical students in Imo state university have endured so much, we have reached the limit, we are living in sorrows as we feel lost in the world, we need to be positively rescued, we need hope, we need to see
the light at the end of the tunnel. We are tired and we are getting depressed. Our counterparts graduate four years before us, we are the longest staying medical school in Nigeria, and we need to be comforted. We call on the government and good spirited individuals both in and outside Imo state, Nigeria, and the world at large to come to our rescue, we need a comforter, we need people to give us hope again. We call on everyone to carry on the campaign against the delayed number of stay in IMSU medical school to the entire nation until it reaches the relevant authorities and something positive is done as your effort today might be your unborn child’s saving grace tomorrow. We need funds to be injected into the medical school and closely monitored by men of proven integrity to enable the college of medicine and the state owned teaching hospital to function efficiently. We need the management to be put to work.

Things are getting worse every day. It is only in IMSU medical school you can find students being sent on a six months to eight months post professional exam holidays just because the next professional exam class which is meant to accommodate them is already accommodating two sets of students against the normal one set of students and thus, no space for the third set to come in. Ten years in the life of a man means a lot. I cannot allow someone close to me to make the mistake of seeking admission into IMSU to study medicine and surgery so as to prevent him or her getting frustrated along the line. We humbly request audience from the relevant authorities and good spirited individuals who can help us achieve our dream of reversing the number of stay from ten years to six years. If only a waiver can be given to college of medicine, Imo state university Owerri, to graduate two classes (sets) each year just for four or five years and the process closely monitored and well implemented, we will have no reason to lament anymore.

WE ARE IN AGONY, WE ARE ALMOST FRUSTRATED, WE REFUSE THE TEN YEARS OF STAY AGAINST THE NORMAL SIX YEARS, WE EQUALLY REFUSE TO GO VIOLENT IN OUR QUEST FOR OUR RIGHT.
THANKS