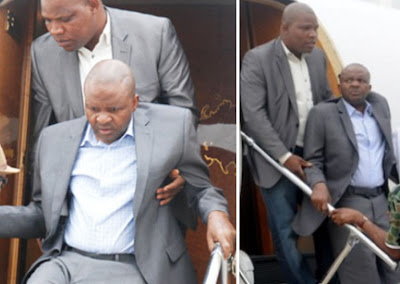 A group identified as Taraba Justice Forum under the leadership of John Ambulus has called for the urgent impeachment of the brain-injured Governor of the state.

According to the group, Governor Danbaba Suntai who returned from the US after 10 months of mental health treatment is incapable of governing the state.

In a news briefing in Abuja on Tuesday August 27, 2013, Taraba Justice forum alleged that Governor Suntai’s return was staged to prove that the governor is still able to govern the people of Taraba.

The Group is calling for an urgent intervention of President Jonathan.

“Now, the truth is out of the bag. After 10 months of treatment, the result is what the whole world saw yesterday. With the way the governor was smuggled in, it is clear, he is not medically fit in all consideration of the phrase.

“The issue is not just that the man cannot walk; the truth is that his brain coordination motor is not working and so the man cannot function even when assisted. The medical crisis was so clearly displayed as the governor cannot even address the media and the people of the state.

“We are vindicated and we hereby use this occasion to call on the state House of Assembly to ask the governor to come and address it and if he fails to do so, the lawmakers should start removal process in line with the constitution. The Assembly must rise to the occasion to save the governor from further embarrasment,” – the group said in Abuja yesterday

I think the guy should be allowed to continue his mental health treatment in the United States.

From the look of things, Governor Suntai was brought home against his wish.

With his present mental state, he can’t decide what to do… some folks are making decisions for him.

I hear he was brought home to prevent the installation of a new governor in Taraba state.