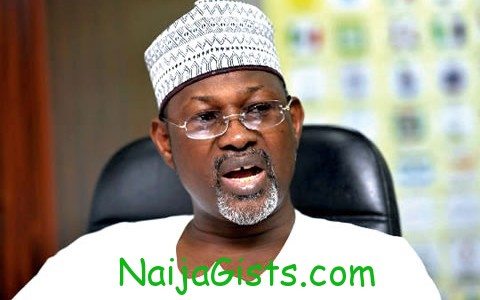 INEC Boss, Professor Attahiru Mohammed Jega reported escaped being stoned to death by some irate youths who attacked him at the palace of the Emir of Kazaure, Alhaji Najib Hussaini Adamu, in Jigawa State.

We learnt Jega was in the town to attend the wedding of the daughter of  emir. It was gathered that trouble started around 12:30 pm when the INEC boss was coming out  of  the palace and the  youths identified him.

A  young girl allegedly led the attack when she collected  sand  and threw  it at the  vehicle in which  the INEC chairman was riding. Then the youths,  in hundreds, began to hurl stones at Jega’s convoy. Several  cars in the convoy were said to have been damaged and their glasses smashed.  Sources said the situation would have been worse but for the intervention of security forces. The youths sang war songs alleging betrayal on Jega’s path.

“You cheated us, you cheated the North, you declared false result, you denied General Buhari the chance to be the president of Nigeria, it was injustice, we will not forgive you”, some of them said..

Another drama played out immediately thereafter when retired Major General Muhammadu Buhari, the presidential candidate of the Congress of Progressive Change (CPC), arrived the scene.

The youths hailed him, saying he was the answer to Nigerians socioeconomic, political, religious and ethnic problems. Contacted, however, the Police Public Relations Officer, ASP Abdul, Jinjiri denied the attack on Jega.