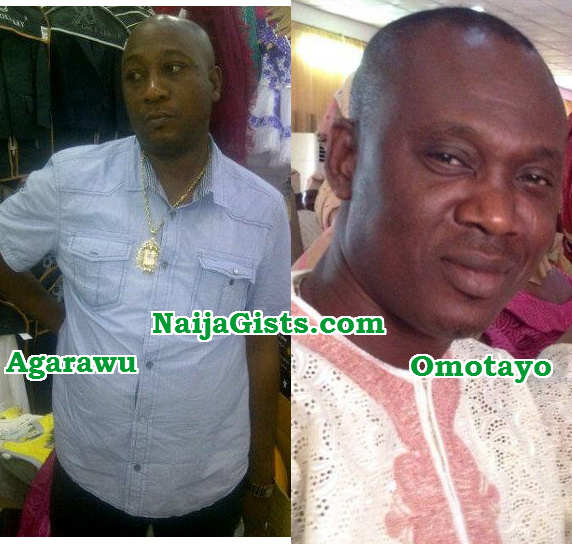 The suspect almost stabbed him to death on Sunday the 23rd of August 2015.

Hear the victim recount his ordeal on the day of the attempted murder:

When I got to Agarawu’s house on the day he attacked me, I called him to open the gate for me which he did, not the one for cars but the small gate.

Immediately he saw me, we greeted each other. He said I should have got to his place early because he wanted to leave home early and I told him it was due to the heavy traffic that actually delayed me. I was with my PA right inside his compound, I was wearing a T-shirt and jeans trousers. I even saw his daughter, Bidemi and I waved to her, ‘My daughter, how are you? You’re a very big girl now.’ Just as her father’s friend and it’s been long I saw the girl, maybe seven or eight years ago. As he was ushering us into his sitting room, he locked the gate and put the key in his pocket.

As we were about entering his sitting room, we saw his wife and we greeted, ‘Long time o, madam,’ she also replied the same way because it’s long ago I saw her last. Then, we entered the sitting room, my PA was with my three phones and a diary. He just asked me, “SOJ, is Mama Okiki in town?” He was referring to my wife because he knows my wife doesn’t stay in Nigeria. I said she is in town. Then, he asked me to call her so that he could say hello to her, and I called her. Immediately my wife picked the call, the first thing she asked was whether I was already coming back but I told her I just got there and Agarawu wanted to greet her. And I handed the phone over to Agarawu. That’s when I heard the most shocking news of my life. He just said, “Mama Okiki, good morning and welcome to Nigeria. Mama Okiki today will be the last day you will see your husband, I just lured your husband to this place so that I can kill him. After killing him, I will send his flesh to you. I heard your husband is dating my wife, Iya Bidemi.”

I don’t know what my wife told him on the phone but immediately I heard that, I was shocked and reacted furiously, ‘Eedi n di e ni?’ (Are you hypnotized?). Are you normal? What kind of rubbish are you talking? Or what do you mean by that? Immediately, he cut the call and put my phone in his jean’s pocket. He just raised up his top and brought out a very sharp cutlass. And he was comfortable walking with it. Definitely, he has been doing it for long.

Didn’t you notice he had something strange under his top?

Not at all, I didn’t notice he was hiding a cutlass there. I was just free with him being my long time friend and client. I didn’t suspect anything evil at all. He was even walking very well with the cutlass. That was what surprised me and my PA. Even when he sat down, I never knew how the cutlass didn’t injure him. So definitely, he is used to that style. Before I knew it he had brought out the cutlass and said, ‘Do you think I am joking with you? Today is your last day on earth.’ He now commanded me to kneel down and I said boldly, ‘Kneel down for what? That’s when he struck me with the cutlass and I blocked it with my hand. His target was to hit me on the head but I blocked it. He struck again and said to me, ‘Do you think I am joking with you? I will kill you like Tunji Alaso.’ He said he will cut me into pieces just like they slaughtered Tunji Alaso. I now said, ‘Agarawu, you will kill me?’

He said, ‘Yes, I will.’ That’s how we’re dragging the cutlass with each other but he held the handle and started matcheting me, hitting me in my belly. He hit my belly more than three times. But I was trying to avoid being hit in the head and leg. The first time he hit me, my PA screamed, ‘Eedi ree o! Don’t kill my boss. Why do you want to kill him?’ As she was shouting, screaming, he just threw the cutlass at the girl and the cutlass hit her on the leg. He now pushed the girl and hit her head at the burglary proof of the entrance to his living room. As he pushed the girl out of the sitting room, I was now left alone with him in the sitting room, dragging the cutlass with him. He now locked the door. I was still hearing my PA screaming, ‘E gba wa o. Somebody help, help! Agarawu wants to kill my boss o! Please, help! But there was no way anybody could enter the living room.

His wife and daughter were also within the compound shouting, ‘Help! Help! But the main entrance to the house had been locked. Some people even wanted to come in through the fence but they were afraid of being electrocuted. At the end he was able to get me in the head. As I noticed that he had hit me in the head, and blood started gushing out, I just summoned courage and held the cutlass strongly with my last strength. That’s why I had a cut on my palm. Both of us now fell on the ground. He now took an electric wire to electrocute me but thanks to Almighty God, I couldn’t feel anything. All the time he was hitting me with the cutlass, he was saying, “So, the cutlass is not effective. That means you’re spiritually fortified, is that not it? I will show you.”

As he was using the wire on me, he wanted to be in full possession of the cutlass again but I resisted that with my strength and I just pushed him outside the living room just the way he pushed my PA out. Then, I quickly locked the gate. But I was still panicking because I didn’t know whether there was another entrance to the sitting room because he’s the one that knows his house very well. Later, I discovered there was no other door to that sitting room. My PA and his wife and daughter were still screaming, crying within the premises. He was still pursuing my PA in the compound while she was shouting for help. I was already soaked in my blood. But all of a sudden I just saw people through the window, coming in. I didn’t know how they gained entry into the compound. More than 50 people came in. But the only person I could identify was one Alhaji Moruf Alagbe who I got to know through Agarawu. Immediately, I saw Alagbe, I came out. I heard Alagbe saying, “There are lots of this guy’s fans outside the gate now. Why did you do this to him? Did you act under the influence of charm or what? He just called the police. I didn’t know the police station he called.

Not quite long, I just saw a team of Special Anti-Robbery Squad (SARS). But thank God, the man that led the team, Mr. Ajobiewe identified me immediately he saw me. He said, ‘Ha, this is Baaroyin Apede Ara.’ He said the best thing is to take us to the police station. And I said I must be taken to the hospital quickly. By that time, I was feeling dizzy already because I had lost a lot of blood. The police now put me in one of their cars. They wrapped my body to cover the deep cuts so that I would not lose more blood.

My PA told me later that they took the cutlass from him and kept it on top of the roof. Since they believe they’re the powers that be, they own Ogun State, he told them nothing will happen. Even all the time he was matcheting me, he was saying he would kill me and nothing would happen. One Inspector Liasu and one other person now took me to the General Hospital behind the station. They stitched all the areas I was deeply injured, including my head and belly. I remember the doctor asking the police who was responsible for all the injuries on me, the Inspector now told the doctor, it’s the powerful people in this place. But nobody is above the law.

That’s the best I heard from the Inspector. The DPO of that station wasn’t there that morning. So, after I was treated at the hospital, the police called me back to the station. It was there they told me they have put Agarawu in the cell. But I don’t really know where they kept him at the station whether behind the counter or inside the cell.

But we learnt he escaped. How? That’s the most surprising aspect of it all.

Naija police we fear una. How can you allow a criminal to escape just like that… una no fear God?