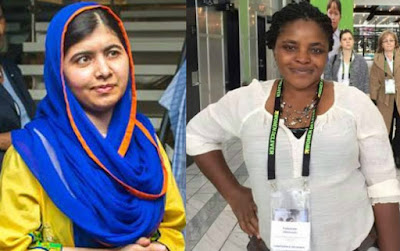 October 21, 2017 – Inspiration Has A Face: The Touching Story Of Courageous Women Like Malala Yousafzani, Folashade Okomayin & Other Heroes

The date was October 9, 2012. It was a day that started like every other day for a young, defiant and courageous Pakistani ninth-grader by the name Malala Yousafzai.

Malala had at this time just completed an exam which she wrote in Pakistan’s Swat Valley and was returning home aboard a bus when suddenly a masked gunman jumped into the bus and shouted, “Which one of you is Malala? Speak up; otherwise I will shoot all of you!!” Morbid fear led the other girls to identify her. Subsequently, the Taliban Islamic terrorist gunman shot her in a manner that left the whole world in shock, and then disappeared into the rowdy Pakistani streets.

Malala’s only offence was that she had been advocating for the right of the girl-child to education in her native country of Pakistan.

Events unfolded quickly so that by the time the celebration of 2012 International Day of the girl-child kick-started 2 days after, Malala was in the hospital recuperating from wounds she sustained from the attack.

She would later recover and would quickly metamorphose into a worldwide celebrity girl-child advocate, so fierce she would go on to win a Nobel Prize while her Islamists attackers faded into oblivion.

On the 11th of October, I joined Mrs. Folashade Okomayin of the Paulash Community Development Initiative, PCDI, an NGO dedicated to the welfare of kids, especially the girl-child, with a host of other Child Rights advocates at the Cyprian Ekwensi Centre for Art and Culture in Abuja, FCT, including government agencies like NAPTIP. The gathering was to celebrate the 2017 International Day of the Girl-Child. As the event progressed, I got the chance to listen to various speakers talk about issues that seriously plague the Nigerian girl-child, i.e child trafficking, teenage pregnancy, rape etc. Also, there were very touching poetic performances by teenage students of some invited schools, Radiant Light Secondary school Bukuru, Jos, Plateau State being particularly notable, on the importance of girl-child education.

At that event, I could not help but marvel at the passion with which Folashade, at whose instance we had all gathered, discharged her duties. In fact, her zeal and sacrifice in carrying out charitable deeds are as infectious as they have become a part of her. For me, this proves that inspiration indeed has a face.

Folashade herself spent her teenage years in a small town in Edo State and recalls how, as a child, she would steal her Grandmother’s food to give to the poor. And even though her life had been dedicated to helping the poor, meeting with a teenage girl hawking plantain on the streets of Abuja around 10 years ago inspired her decision to go into full-time charity work. She then re-dedicated her life to ensuring a better life for less privileged Nigerian children, especially the girls among them, who are the most vulnerable.

Like Malala, countless girls all over Nigeria continue to encounter ordeals on a daily basis. However, unlike Malala who survived her attackers, many Nigerian kids have died unsung heroes. From gender inequality to rape, female genital mutilation, child marriages leading to extreme cases of VVF, sex slavery, street hawking, to outright abduction like the very popular Chibok girls, to dropping out of schools, from trafficking in humans and case of maltreated house helps, to the unimaginable case of child ‘witches’ killings, a torrential experience of all manner of ill have befallen the girl-child in this country.

With a total population of 192, 222,000 (United Nations estimate), 42.54% of which are children below age 14, over 70 million of our total population is made of children. Yet over 30 million Nigerian children have either experienced one of the above mentioned abuses or are at risk.

According to very disheartening statistics, more than 15 million children, surpassing the entire population of Togo, Seira Leone and the Gambia put together, are Almajiris in northern Nigeria.

Over 10.5 million Nigerian wards according to the UNICEF, have dropped out of school, the largest case of such in Africa and perhaps the whole world, and alarmingly, this number comprises mainly of girls.

Close to 3 million girls are given in marriage before they attain adulthood and as a result many fall victim of VVF, especially in northern Nigeria.

Over 5 million children are either of artisans -mainly in western Nigeria, or sold in child factories -mainly in eastern Nigeria, turned into sex slavery, trafficked, killed by ritualists and or are working as child labourers in other undiscovered places in Nigeria.

Apart from the very popular Chibok girls’ case, over 800, 000 kids across Nigeria have been abducted in the last 10 years.

Then the most depressing for me personally, since 1999, over 15,000 kids below the age of 15 have been accused of witchcraft by con men parading themselves as pastors and prophets and have thereafter been either abandoned, tortured, maimed and even killed by their own family members. This has been especially prevalent in Akwa Ibom State and other states across Southern Nigeria. It is all the more detestable that instances of such acute injustice and dehumanization occur with the aid of the said prophets to whom huge sums of money are usually paid as ‘exorcism’ or ‘deliverance’ fees.

Are we to talk of the almost 3 million kids that have been displaced by the satanic group Boko Haram since 2011, scattered across various IDP camps in northern Nigeria today?

Even at this point, the list is still inexhaustible.

All these facts and figures are coming from a country where according to reports, Senators and House of Rep members earn a total of N6.78B annually in salaries and over a quarter of the national budget is lost to corruption almost on a yearly basis.

We must understand that children are a blessing, and like adults, they have equal right to life, to love and security, the same things that we earnestly crave.

The fact that Malala refused to bow to the wishes of the Taliban and determined to get an education, and that she was actually on her way from school the whole time she was attacked, is a testament to the importance and power of education.

We do not need to be reminded that education is the best legacy we can give to our children or that ceteris paribus, it is the essential tools by which we can improve their future.

Yet these days, as I observe the debate on the place of children in society unfurl with keen interest on television, radio, print media and conferences, I ask myself:

Will there ever be a day in Nigeria where the rights of children will truly be taken seriously, beyond lip-service, like those of adults?

Poverty, some part of our culture and religious affiliations are part of the factors seriously militating against the constitutional rights of children especially the girl-child especially- to education and a good life

Well-meaning Nigerians must rise up and join NGOs like PCDI, Child Rights and Rehabilitation Network (CRARN) and a host of others, in their call on the government and society to adhere to what is stipulated in our constitution as the right of children to education. We must ensure free and compulsory education for every child irrespective of tribe, religion and the social standing of their parents.

This is because there is only so much these NGOs can do to alleviate the suffering of our teeming kids. In the end, the greater responsibility rests on society and government, in whose hand lie the ultimate fate of our children.

The worth of a country should not be measured by how she massages the ego of the wealthy, powerful few and takes care of their kids, but on how she caters for her most vulnerable ones.