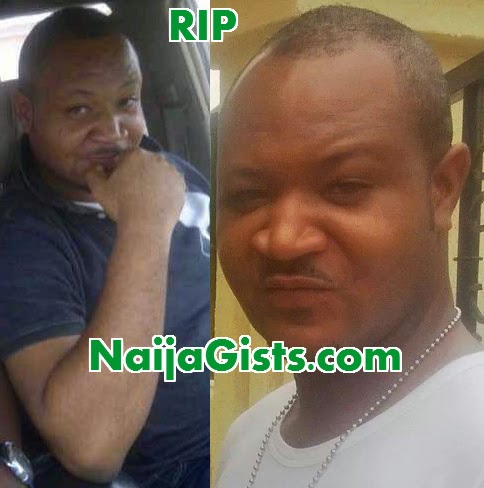 Controversial Nollywood actor Muna Obiekwe who was involved in an x-rated movie scandal with actress Biola Ige few months ago has passed away.

According to NaijaGists.com sources and several fans who wrote us today, the actor passed on at exactly 5 minutes after 4pm at an hospital in Festac town Lagos.

It was initially reported that the actor has passed on but a Twitter handle bearing the actor’s name debunked the story putting many of his fans in confusion but as we speak, the actor has died.

We learnt that the actor was rushed to an undisclosed hospital in Festac this morning after he was found vomiting at home. His condition deteriorated and he gave up the ghost.

Family sources told late Muna Obiekwe’s colleagues that the actor battled kidney disease secretly for a while and has been going for regular dialysis. He reportedly stopped going for dialysis first week of January.

Late Muna was said to have spent all his fortune on Kidney dialysis and planned to do a stage play in order to raise money for his treatment but he died before fulfilling his wish.

Unlikely his colleagues that go about soliciting for fund from the public, the actor kept his own kidney battle private.

Mike Ezuruonye, Nonso Diobi and Ibinabo Fiberesima have all confirmed the death of the ailing actor.

Muna was rushed to the hospital today after a relapse but he was declared dead at the hospital.

In his short time on earth, the actor accomplished so many great things.

Not only did he graduate from one of the best Universities in Nigeria, the actor also has over 250 interesting movies to his credit.

Muna bagged a degree in Theatre arts at Obafemi Awolowo University. He joined Nollywood in 2001.

The talented Nollywood actor is survived by his two children(twins) and wife abroad.

The corpse of the movie star who died today at age 36 had been moved to a mortuary in Festac.