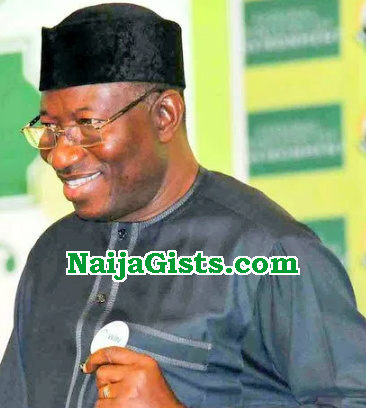 Nov 2nd, 2016 – It Is Time For EFCC To Arrest Jonathan For Defending Dasuki – Lagos APC

The spokesperson for Lagos Chapter of the APC Party, Mr Joe Igbokwe has come after ex-President Jonathan for his cheeky defense of ex-NSA Sambo Dasuki.

Here is the statement Mr Igbokwe released on behalf of the party yesterday:

“Even as we concede that Jonathan is on a desperate bid to rehabilitate himself, we wouldn’t believe that a former president should be so contemptuous of the intelligence of Nigerians as to give the kind of defence he gave to Sambo Dasuki. We wonder what Jonathan makes of the horrid details that are emanating from the Dasukigate issue with shocking evidences, confessions and even refunds made by those that participated in that monumental corruption.”

“To claim that Dasuki and his partners did not steal the arms purchase fund reveals the inner beliefs of Jonathan. One would have expected Jonathan to be cautious in seeking to advance very childish and inadmissible exculpation of his subordinates for glaring acts of corruption. We had expected that Jonathan would have striven to water down the lowly impression held of him by Nigerians and the international community by not deciding to be so patronising to clear cases of corruption by his subordinates.

“By Jonathan’s defence of Sambo Dasuki, we believe time has come for the security agencies to pick up Jonathan to tell the nation all that he knows of the many cases of corruption that happened under him. We think that Jonathan knows more than he admits about the unseemly corruption that he presided over and should be brought in for questioning. It’s becoming indefensible for Jonathan to pretend he was innocent of the corrupt acts of his subordinates.

“While we condemn Jonathan’s cheeky defence of Dasuki, even in the face of monumental damning evidences, we want to state that the anti-corruption war is incomplete until Jonathan justifies his defence of corrupt subordinates.”