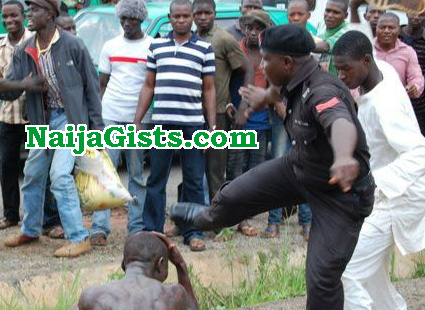 For as long as one can remember there has always been ‘jungle justice’ in Nigeria. All it takes is for somebody to shout ‘ole’ (thief) and anybody seen running away – the suspect or not – is apprehended, subject to a kangaroo court before being beaten mercilessly to a pulp – or even killed in the most gruesome fashion imaginable.

Yes, the suspect might have committed a serious crime – murder, kidnapping etc – but it’s not up to the members of the public to take justice into their own hands. The police and courts, however inept they are, are there to deal with these kinds of things.

In the eyes of the law everybody is innocent until proven guilty. A man about to be lynched will not have a fair trial at the hands of a baying mob. And most important of all tragic mistakes can be made. How many times have some unfortunate ones happened to be in the wrong place at the wrong time? Take the case of the ALUU 4; four Uniport students who were murdered by a lynch mob in Aluu , a town in Port Harcourt, in 2012 for a crime they were totally innocent of. How many more innocent people have been killed by lynch mobs who think they have the moral right to play judge, jury and executioner? Countless and unless something is done there will be more. And to the lynch mob how does it feel to have blood on your hands?

Anybody participating in a lynch mob is guilty of MURDER and they are no different to the person they’ve just killed. It becomes a simple story of the kettle calling the pot black; one murderer killing another because they have no legal right to kill anybody.

In the past few days a video, that has gone viral online, has emerged of what appears to be a young boy being lynched and set ablaze by a mob for stealing. What could he possibly have stolen that could warrant him being beaten to death and then set ablaze? And the adults meting out ‘jungle justice’, don’t they have brothers, sisters or offspring the boys’ age that they can’t show mercy? If you want to punish him, beat him(reasonably) and hand him over to the police.

The sad thing is that most Nigerians are hypocrites; when you see a real thief, like a politician who has stolen billions of naira from the public coffers, you bow down and prostrate in front of them. You show reverence to a big thief and lynch a small insignificant thief – double standards especially when a thief is a thief!

It’s high time our lawmakers who like to busy themselves passing tolotolo laws pass a law that outlaws ‘jungle justice’! Nobody has the right to play judge, jury and executioner taking the life of a criminal suspect however heinous their crimes might be . The courts are there to pass judgement and not the people – the rule of law is what prevents anarchy and what makes us different from animals that kill each other at random. And in the words of the Bible, ‘let he who has no sin cast the first stone!’