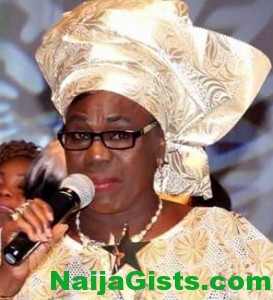 The actress who is now very scarce on the big screen told Sunday Scoop her relationship with God wasn’t good when she was young not until God arrested her that she made amends.

“I became preoccupied with making my children comfortable; ensuring that they didn’t lack. I didn’t even think of buying clothes for myself. When all my colleagues were buying cars, I couldn’t buy one for myself.

The opportunity to buy a car only came when I fell from a commercial bus in front of the late Gbenga Adeboye’s office. I think his boys told him about the accident and he later promised to launch a movie for me. It was the money I got from the launch I used to buy a Mazda 626.”

“Though I wasn’t a strong Christian when I was younger, I never visited a witch doctor. I only called on God whenever I was in trouble. But when I got to know God better, I realised that He had been watching over me. Maybe He felt that He still needed me to work for Him.”