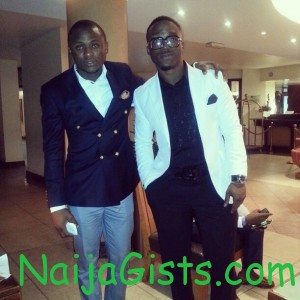 Nigerian artist Onoyom Mbuk aka Ojay Iyanya and his manager Ubi Franklin are presently doing everything possible to get out of police trouble after they allegedly refused to show up for an event they were paid for. naijagists.com

We learnt Iyanya was paid the total amount of 1.7Million Naira to perform at 2 different Nite of a Thousand Laughs shows in Benin city and Port -Harcourt by producer Opa Williams.

The trouble started when Iyanya refused to show up for the two shows.

He apparently travelled to Port Harcourt alongside comedian Bovi and rapper Olamide on a fully paid flight by Opa Williams.

“We were all disappointed, we waited in vain. As soon as Bovi announced he was not going to show up, everybody started leaving,” an attendee of the event.

Today police quizzed Iyanya and his manager after Opa Williams reported them at Mile 3 police division.

“Yes I was at the Police Station this morning, we have decided to return all money paid to us, it’s not a problem,” Ubi-Franklin told NET.

Below is Franklin’s side of the story.

“We were paid to attend and perform at the Benin and Port Harcourt shows but we missed both due to reasons beyond our control. We missed the Benin gig because we were in Ghana as at that time and we arrived pretty late for the PH gig. We however had issues with initial payment from the show organizers also.”

Iyanya and his manager have been released while police continue their investigation.