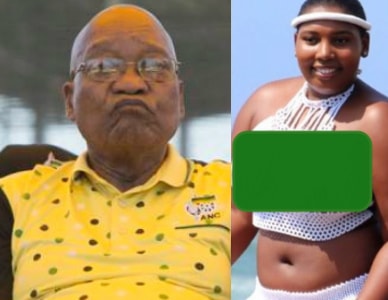 76-year-old Jacob Zuma who welcomed his 22nd child on Thursday is getting ready to pick his 7th wife.

The lady who delivered his love child at a private hospital in Durban on his birthday, 24-year-old Nonkanyiso Conco will soon become the seventh official wife of the polygamist who gave up power few months ago.

The ex-President who visited his baby at the Busamed Hillcrest Private Hospital under strict security on Thursday confirmed with News24  that she is going to marry her.

His son, Ray Zuma also confirmed same in a chat with News24.

Jacob Zuma is 52 year older than Conco, a resident of  Hilltop Private Estate in Holiday town of Ballito in Kwazulu Natal, South Africa.

Agnes Gerald Masogange Is Dead: Davido Ex-Tanzanian Girlfriend Dies Of Pneumonia
Emeka Okoro: I Was A Womaniser Until I Gave My Life To Christ After I Got Married